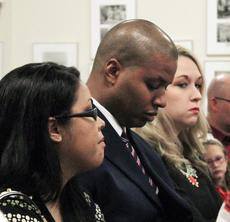 The motion calls into question the definition of a person in a position of authority or position of special trust in a Kentucky Revised Statute subsection, of which Young is charged.

The statute defines position of authority to mean parents — biological, adoptive, foster or step — adult youth leader, teacher, school employee and others. It does not list a police or law enforcement officer.

Smith said because the statute neglects to list police officers, it is unconstitutionally vague, which is grounds for dismissal.

“Essentially, they are trying to put a square peg in a round hole,” he said of the Commonwealth’s charges in an interview following the hearing. “The motion is well taken in law and fact. We’re cautiously optimistic the charges will be dismissed.”

“We expected it to come,” she said. “We’re not surprised.”

Farmer now has 45 days to file a response to the motion and Smith was given 30 days following Farmer’s response to file his. Once both responses are filed, then the Judge Bruce Butler will make a determination.

No future court date was set in the case.

Robert Schaefer, attorney for former Brandenburg police officer Todd Matti, said he is awaiting the outcome of the motion made in Young’s case to file one of his own.

He also said in court a plea offer was made to his client, but he did not disclose the details.

Matti is charged with two counts of third-degree sodomy.

According to Matti’s indictment, the offenses occurred “on or about Nov. 16, 2012, in Meade County,” six days after the girl turned 15.

An indictment is an allegation, not proof of guilt.

The motion Smith made could be “terminal” to the Commonwealth’s case against Young based on precedent and it applies to one of his client’s charges, Schaefer said.

The next appearance for Matti is a pre-trail conference at 9 a.m. June 19.

Both men have entered not guilty pleas and requested court files, including documents from the investigation, be sealed. The Commonwealth’s did not object. Matti and Young remain free on a 10 percent of $10,000 cash bond.

Schaefer and Smith said they had to supply an external hard drive to the Commonwealth attorney for discovery.

“The investigators in the case did a thorough job,” Smith said. “The information provided is voluminous.”

Because of all the in­formation, Schaefer said the process will be lengthy.

KSP Post 4 spokesman Jeff Gregory said the case originally was brought to the post July 31 with a complaint of a KSP trooper from Post 4 having inappropriate relations with an underage girl. The investigation, which is ongoing, uncovered additional allegations against another KSP trooper, a Brandenburg police officer, a Breckinridge County sheriff’s deputy and an adult male in another state.

In an interview March 3, Jefferson County Com­monwealth’s Attorney Tom Wine, whose office has been assigned as special prosecutors in the case, said indictments would be sought against four individuals during the grand jury presentation Monday. Only cases against Matti and Young were presented.

Information regarding former trooper Jerry Clanton and former Breckinridge County Sheriff’s deputy Chris Woosley have not been presented to the grand jury and Farmer said she has no intentions of presenting those cases while the other two are ongoing.

“We do not have an intention to present anything else,” she said. “We are focusing on this case.”

Clanton admitted to sexual relations with the girl during a KSP Trial Board in early January appealing his termination.

Farmer said the cases are moving normally through the court system.

“It’s our judicial process,” she said. “We’re moving as timely as we can.”

I know YOUNG and he's wife for over 13 years. Always funny and respectful, I never sew any that coming... SHOCKED.