Another Lower Mainland police officer is suspected of impaired driving after an off-duty Vancouver Police patrol officer was pulled over this weekend.

The officer, who police haven't officially identified, was spotted early Sunday morning by another officer who had just finished a shift performing drinking and driving counterattack duties - the VPD's effort to stop drunk driving.

"[The officer] sees a car weaving in front of them, and makes a call to 911," VPD Const. Tim Fanning, a department spokesperson, told reporters Monday.

The suspected vehicle was pulled over on Knight Street near 32nd Avenue.

"They also discover in their conversations with him, it is revealed he is a Vancouver Police officer."

Charges are being recommended against the officer, described only as a 30-year-old patrol constable with three and a half years of experience. The officer has been re-assigned while an investigation is underway.

Fanning said the officer's name would be released when he is officially charged.

"We don't tolerate impaired driving in the City of Vancouver," Fanning said.

"It doesn't matter who we pull over. We treat everyone in the same way."

The RCMP in the Lower Mainland has had similar experiences with officers getting in trouble with the law.

At the end of October, a North Vancouver RCMP school liaison officer and a school liaison officer in New Westminster were charged with impaired driving. Additionally, an unnamed RCMP corporal faces charges of impaired driving after a crash on Oct. 25 in Delta that resulted in the death of motorcyclist Orion Hutchinson, 21. The officer was among the group of RCMP officers deployed to Vancouver International Airport on Oct. 14, 2007 where Polish immigrant Robert Dziekanski died after being hit by a Taser.

The videotaped beating of a transgender woman while in police custody in Memphis last February led to charges against two officers and national condemnation from gay rights groups. The officers were fired, and the Memphis Police Department overhauled some of its procedures and began sensitivity training for the entire force.

“Duanna Johnson’s case was tragic before, and now it’s an almost unimaginable loss,” said Jared Feuer, the Southern regional director of Amnesty International. “Her treatment demonstrates a culture of violence against transgender people that must be addressed.”

Ms. Johnson sustained a gunshot wound to the head late on Nov. 9, the police said, and officers found her body after responding to a shooting call in North Memphis. Investigators said three men were seen near the crime scene before the officers arrived, but police officials say they have no suspects, have made no arrests and do not have a motive for the killing.

Ms. Johnson’s case attracted national attention in June after local television stations obtained a grainy surveillance videotape that showed a police officer, identified as Bridges McRae, striking her repeatedly with a gloved fist with handcuffs slipped over his knuckles and pepper-spraying her in the face.

Another officer, James Swain, held down the 6-foot-5 Ms. Johnson during the assault, which occurred on Feb. 12 after she was arrested on a prostitution charge. Ms. Johnson, who was in a booking area at the Shelby County Jail in Memphis at the time of the attack, told the authorities that Officer McRae had also hurled antigay epithets at her.

“The shock value of that video was incredible,” said Arthur E. Horne III, one of the lawyers who represented Ms. Johnson in a threatened federal civil rights lawsuit against the city, the Police Department and the officers involved in the attack.

The video was splashed across the Internet. The Memphis police director, Larry Godwin, said the crime left him “sick” and “infuriated.” Mayor Willie W. Herenton called the attack “disgusting” and promised to enforce any punishment doled out by the judicial system. The Federal Bureau of Investigation also opened an inquiry into the case to check for possible civil rights violations.

In June, the Police Department fired Officer McRae and Officer Swain, who was a probationary officer, and asked the Tennessee Equality Project, a gay rights group, to hold training sessions for officers about sexual orientation.

Mr. Horne had offered to forgo a lawsuit if the city settled with Ms. Johnson for $1.3 million. He said her estate might still proceed with a lawsuit against the city, the department and the two officers over the beating.

“Hopefully,” Mr. Horne said, “it will open the eyes of people in Memphis, the country and the world to the challenges that transgender and gay people face due to hate crimes. The only bright side of these crimes may be that they can effectuate some change for transgender people.”

Jonathan Cole, the Shelby County chairman of the Tennessee Equality Project, praised the Police Department as embracing the problem. But Mr. Cole said that Ms. Johnson’s killing demonstrated how much discrimination remained in Memphis.

“We’re a sleepy Southern town,” he said. “For the most part, I think people in the South treat each other well. But there are prejudices that people have, and those prejudices come out in ways that are often violent when no one is looking.”
No comments:

Canby's City Administrator placed Police Chief Greg Kroeplin on paid administrative leave today, following an Oregonian story yesterday that outlined allegations from an ongoing FBI investigation that he concealed or failed to investigate one of his officer's alleged steroid abuse.

"The City of Canby takes seriously any allegation of employee misconduct,'' City Administrator Mark Adcock said, in a prepared statement. "The City understands the importance that the community maintains the trust in the integrity of the Canby Police Department that it has worked so long and hard to earn over the years.''

The city has ordered an "independent, third-party entity'' to carry out its own personnel investigation, the statement says.

The FBI launched a public corruption investigation in February, which led to the resignation of Canby Officer Jason Deason on July 17. Federal authorities alleged in multiple search warrant affidavits filed in U.S. District Court that Deason bought steroids in uniform, while on the job.

Further, federal agents alleged in court documents that Canby police supervisors either failed to address the problem or concealed its existence. A neighboring police agency gave Chief Kroeplin in July 2006 a two-page memo detailing an informant's tip about Deason's steroid buys from an Oregon City man, but Kroeplin brushed it off as unsubstantiated rumors, federal agents alleged in court documents.

Kroeplin last week referred all questions about the investigation to the FBI.

The FBI investigation is continuing. No charges have been filed. 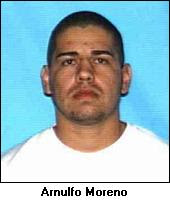 A Riverside County Sheriff’s Department correctional deputy finds himself on the other side of the law.

Investigators say that Arnulfo Moreno, 31, sexually assaulted and attempted to murder a woman Thursday. The alleged domestic violence occurred at a residence in Menifee.

On Saturday, at about 1:00 am, the Riverside County Sheriff's Department took Moreno into custody without incident. Investigators had arranged a location for the suspect to turn himself in.

Moreno had worked with the RSO as a correctional deputy the past 16-months.

The victim’s identity, her condition and the nature of her injuries were not disclosed.
No comments:

A Bartlesville police officer is on paid administrative leave tonight, after a 12-year old girl says he choked her.

Hannah Kerr's parents hosted a party Saturday night when the officer, who's also a family acquaintance, stopped by.

At one point that evening, Hannah says the man came up to her and choked her, to the point where she passed out.

Once internal affairs is done with their investigation, the police chief will decide what happens next.
2 comments:

Email ThisBlogThis!Share to TwitterShare to FacebookShare to Pinterest
Labels: assault, Oklahoma
Newer Posts Older Posts Home
Subscribe to: Posts (Atom)
All person charged on this site with a crime are presumed innocent until proven guilty.