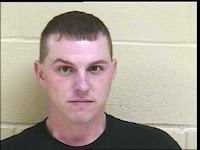 A Shreveport police officer has been charged with driving while intoxicated.

Shreveport police officer Michael Welch, 32, was charged Saturday with first-offense DWI, a misdemeanor, in connection with an incident that occurred in the 6200 block of Bert Kouns Industrial Loop.

Welch was off duty but was driving a marked police car when he was arrested, police said.

At approximately 3:30 a.m., Shreveport police received a complaint from a concerned citizen regarding a marked patrol unit being operated in a careless manner on Bert Kouns. Officers were immediately sent to the area and soon found Welch.

According to his booking report, he was found asleep behind the wheel of his police cruiser with the engine still running. After investigation, he was arrested just after 4 a.m. and booked into the Shreveport City Jail. He later was released on a $1,086 bond.

Welch, a three-year veteran assigned to the Uniformed Services Division, of the 6200 block of Bert Kouns, has been placed on administrative leave by Chief Henry Whitehorn pending an internal investigation.

Email ThisBlogThis!Share to TwitterShare to FacebookShare to Pinterest
Labels: DWI

The Berrien County prosecutor says drug charges against seven people will be dismissed after further investigation into possible misconduct by a former police officer.

Police didn't have information about whether Collins had an attorney.

Inglewood police officers have repeatedly been embroiled in sex-related scandals over the last five years, according to court documents, law enforcement records and interviews.

In May 2004, Officer Ron Navarreta, a 13-year veteran, was fired after FBI agents discovered that a suspect in a child pornography investigation had e-mailed explicit images to Navarreta's AOL account, according to court records. Investigators found that Navarreta's AOL account included a screen name called "PlyGRoUndObsver." An agent alleged that the screen name's user prowled the Internet seeking a relationship with a mother and daughter and listed "teaching vey yng fem students about love" as a hobby, according to internal affairs records that Navarreta's attorney included in a civil court case filed to get his job back.

Navarreta denied receiving the images e-mailed to him by the child-porn suspect. FBI agents were unable to examine the computers he used because they had been sold or reported stolen.

Manzi, according to an internal affairs report included in court records, played for on-duty colleagues a videotape and an audio recording of himself having sex. Manzi was suspended for 20 days but retired on disability before the discipline was imposed. He declined to comment.

In January 2006, another officer was accused of taking a cellphone photograph of an inmate during a strip search. The officer was suspended and then fired for unrelated misconduct.

Police Chief Jacqueline Seabrooks said supervisors now monitor strip searches. "That's one of the circumstances where we have to be exceedingly careful because it has the potential to be interpreted as something very demeaning," she said.

In December 2006, a woman visiting from Florida claimed that an on-duty Inglewood officer raped her and forced her to perform sexual acts while he kept his hand on his holstered gun.

According to a district attorney's report, the woman was standing on a street corner wearing a miniskirt and fishnet stockings when Officers Donvey Lindsey and Brandon Beak pulled up, suspecting she was a prostitute.

The officers followed the woman back to her motel and confirmed she was a registered guest, according to the report. Lindsey then followed her to her room, telling Beak that he would check her identification, Beak told authorities.

The woman, in a statement to the FBI, claimed she complied with Lindsey's orders to perform sexual acts because he threatened to arrest her.

Prosecutors declined to file charges, saying it would be difficult to prove the case because the woman had been arrested for prostitution in her home state. The woman has filed a federal civil rights suit against the city. The suit is pending.

Seabrooks said Lindsey has been fired. He did not return a call seeking comment.

Just two months after the rape claim, the city was shaken by allegations that other officers visited prostitutes at massage parlors. Among them was six-year veteran Officer Richard Correa. According to civil court records, a prostitute who worked at a massage parlor on La Brea Avenue told investigators that she had performed a sex act on Correa while he was on duty and in uniform. She implicated other officers who she said frequented the massage parlor for sex and promised to alert her to police raids.

Correa told internal affairs investigators that he had sex with an employee at a different massage parlor on Manchester Boulevard while in uniform, court records show. He denied paying her and said it happened only once.

"That was a bad decision on my part, and it's stupid," he told investigators. He was fired in March 2007.

A department spokesman said seven officers were fired for allegedly visiting the massage parlors or covering for officers who did.

Seabrooks said she and her predecessors have moved swiftly to rid the department of officers who commit serious misconduct. She said the 195-officer force should not be judged based on the conduct of a relative handful of officers.

"It is unfortunate that these things seemed to have plagued us," she said. "In any barrel, you're bound to find some bad apples that touch each other, and you're going to find the vast majority that are just fine."

A San Antonio Police Officer is arrested for assaulting his ex-girlfriend. The officer, Rory Rogers, is out of jail tonight. He’s accused of pushing down his ex-girlfriend at a Stone Oak Parkway bar.

Police say there was broken glass on the dance floor and she cut her arms, knees, and side. Sergeant Gabe Trevino with the San Antonio Police Department says they collected all the evidence they could before issuing a warrant.

“You can imagine at a club like that there are a lot of people that are there that saw what happened and we’re going based on that, and if he wants to tell us something later on, then certainly we will listen to that.”

Rogers is placed on administrative leave pending an outcome in the case.

Email ThisBlogThis!Share to TwitterShare to FacebookShare to Pinterest
Labels: assault, Texas
Newer Posts Older Posts Home
Subscribe to: Posts (Atom)
All person charged on this site with a crime are presumed innocent until proven guilty.