Prison Officer Accused Of Having Sex With Inmate 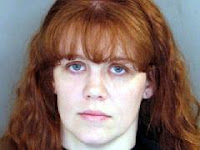 An Anderson County detention officer has been arrested and her position terminated after she was accused of having sexual intercourse with an inmate.

The Sheriff's Office said that Gina Loftis is charged with sexual misconduct with an inmate.

Investigators said that Loftis admitted in a written statement that she had sex with the inmate when she was on duty at the Anderson County Detention Center.

She was booked into the detention center Tuesday afternoon.

The sheriff's office said that Loftis' position with the Anderson County Sheriff’s Office was terminated Tuesday.

She was being held pending a bond hearing.
No comments:

A police officer who has been with the El Paso department for 15 years was arrested on charges of family violence.

Officer Victor Aguirre was arrested Friday for allegedly breaking into the home of his ex-common law wife, Teresa Ortega, 33, around 4 a.m.

The El Paso Police Department arrived at 3337 Wayside Drive to a burglary in progress call.

Ortega tried hiding from Aguirre by locking herself in a bedroom, but Aguirre was able to force himself in and assaulting Ortega, said police spokesman Christopher Mears.

Aguirre ran away before police officers arrived at the home.

Detectives arrested Aguirre on Tuesday and charged him with one count of burglary of habitation, a first-degree felony.
No comments:

Police Chief and Assistant Chief both Charged with Sexual Assault

Woods said the termination was official as of 5 p.m. Monday.

Chief Christensen, 40, and former Assistant Police Chief John Sickels, 38, are both charged with second-degree sexual assault in a case involving a female bartender working at the Crestmoor Golf Club.

The bartender told the investigator that Sickels raped her behind the bar while Christensen "held her hand, stroked her hair and 'shushed' her."

Court documents show the incident happened around 2 a.m. when Christensen, Sickles and the bartender were the only people left in the bar.

If convicted, both men face the possibility of up to 25 years in prison.

Woods said city officials hope to name an interim chief in the next few days.

"I want everyone to know that I am very proud of our police force and the way that they have reacted to the difficult circumstances. My public thanks goes to each and every one of them," Woods said in a statement released Tuesday.
No comments:


A Douglas County corrections officer has been cited for assault after being accused of attacking an inmate at the county jail.

The inmate, 23-year-old Michael Farrar, says he was in jail June 11 on suspicion of driving under the influence. He says the corrections officer beat him up as he was walking toward his cell.

Jail officials and the Douglas County Sheriff's Office confirm that the guard, Eric Fleming, was cited on suspicion of third-degree assault. He is on paid administrative leave during an internal investigation.

Two other officers who witnessed the incident were also placed on paid leave but have not been cited.
No comments: