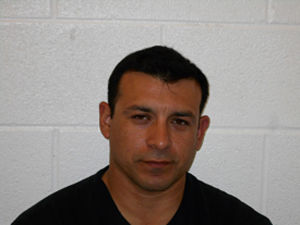 A Big Spring Police officer has been arrested on a state jail felony of theft by a public servant.

According to a report from BSPD, the department officials were told about allegations involving misconduct by an officer identified as Simon Elizondo.

On Friday, an arrest warrant was issued for Elizondo on a charge of theft by a public servant, the report stated.

According to the report, Elizondo was arrested and charged with theft by a public servant and placed in the Howard County Law Enforcement Center. What Elizondo had taken was not specified.

BSPD also stated in the report that because of Elizondo’s “liberty interest” and that the investigation was currently ongoing, no further information would be provided.
No comments:

The U.S. Attorney's Office says a Saratoga County Deputy Sheriff has been arrested on drug charges.

Charles Fuller, 46, from Corinth was charged on Friday with attempting to aid and abet the possession with intent to distribute 500 grams or more of cocaine. If convicted, Fuller faces a maximum of 40 years in prison, and a $5,000,000 fine.

According to the complaint, the FBI, along with a confidential source arranged to buy a kilo of cocaine from Fuller while he was off duty.

"The allegations against Fuller are an affront to and undermine the integrity of the hardworking men and women of the Saratoga County Sheriff's Office. We will not tolerate corruption among our ranks. Our promise to the people of Saratoga County is that we will continue to work diligently to ensure that every member of this office deserves the respect and trust of our community," says Saratoga County Sheriff Michal Zurlo.
No comments:

The Jacksonville Sheriff's Office arrested one of its own on petite theft charges.

Narcotics detective Julio Cerpa is accused of stealing a $49 jar of cream from Bailey's Gym on Merrill Road.

Cerpa has been with the Jacksonville Sheriff's Office since 2006.

A former Northern California police officer was convicted of sexually assaulting five women while authorities said he was on patrol.

A Yolo County jury found Sergio Alvarez guilty on Thursday of 18 counts of kidnapping, rape and forced oral copulation, the Sacramento Bee reported. The jury could not reach a decision on 10 other counts, including charges related to Alvarez's alleged attack on a sixth woman.

Prosecutors said Alvarez, while serving as a West Sacramento police officer in 2011 and 2012, targeted drug addicts and prostitutes. He allegedly forced them to perform sex acts in his cruiser, back alleys and wooded lots.

Alvarez showed no reaction as the verdicts were read, the Bee reported. His attorney, J. Toney, had accused the women of lying to authorities and said one of them had a months-long sexual relationship with the officer.

"I hope that our verdict reaffirms the dignity and worth of these women who spoke," juror Linda Bond told the Bee after the verdict.

Alvarez is scheduled to be sentenced on April 4 and is facing the possibility of multiple life sentences.

District Attorney Jeff Reisig called the case a "horrific betrayal of trust" and said that his office wanted Alvarez to spend the rest of his life behind bars.
No comments: