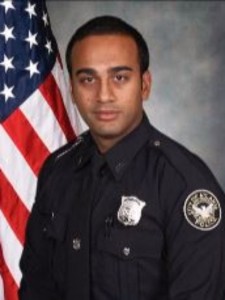 Officer Tahreem Zeus Rana, 23, was arrested at an airport Thursday morning for kidnapping, murder, tampering with evidence, and arson while attempting to flee to Mexico.

Last Friday, Rana met up with a woman named Valencia Woodard, 26, after responding to an ad she had posted.  Woodard had been in Georgia from New York for less than a week, it is likely she moved to be closer to her eight year old daughter who was living in Georgia with her grandmother.

Detective Stephen Cushing reports that Rana picked her up, brought her to a dead end street not even a mile from his house, and shot her repeatedly with his .40 caliber glock issued by the department.

Rana then allegedly set her body on fire to destroy the evidence.  A city worker found her body, still burning, on the side of a road.

The department has issued a statement saying:

“We are shocked and saddened by these developments. The officer has been relieved from duty, and is in a non-enforcement status. Chief Turner will schedule an emergency hearing immediately today to determine the next course of action. We must allow the justice system to run its course. But these clearly are very disturbing allegations that are not in line with the expectations we have for our officers, and will be immediately dealt with.”

“Officers remember him actually walking to school here as a young boy saying when I grow up I want to be a police officer,” said Cushing according to 11Alive.  Psychopathic tendencies start early folks.

The killer cop waived his first court appearance on Friday will remain held without bond until his preliminary hearing, Sept. 12, in Fulton Superior Court.

A Tulsa police husband and wife were arrested in connection with the fatal shooting of a 19-year-old man on a street near downtown, and the couple's daughter said her father shot at her, too.

Shannon Kepler, 54, a 24-year veteran of the Tulsa Police Department, was booked into the Tulsa Jail on first-degree murder and shooting with intent to kill complaints. His wife, Gina, 48, also a Tulsa police officer, was jailed on an accessory to murder complaint.

The two weren't on duty at the time the shooting of 19-year-old Jeremy Lake occurred in the 200 block of North Maybelle Avenue about 9:15 p.m. Tuesday, police said. Shannon Kepler works at TPD's police academy and worked Tuesday, public information officer Jillian Roberson said. Gina Kepler is a patrol officer at the department's Gilcrease division, and did not work Tuesday, Roberson said.

Both are held at the Tulsa jail, police chief Chuck Jordan said, but are confined in an area away from other inmates they may have come into contact with on the job.

The gun involved in the shooting was not a service weapon, Jordan said. Police have not said whether the weapon has been recovered.

Police said an argument occurred between Lake and Shannon Kepler, who was in a black Chevrolet Suburban. Lake, who reportedly was with Kepler's daughter, was shot "two or three times" after he told Kepler that he was her boyfriend, according to an arrest report.

Lisa Kepler, the 18-year-old daughter of Shannon and Gina Kepler, spoke with the Tulsa World on Wednesday morning from the front porch of the home she shared with the homicide victim, who also was her boyfriend.

Lisa Kepler and Lake were walking back from Guthrie Green and were in the street in front of their home when a black SUV pulled up, and Shannon Kepler stepped out.

Lisa Kepler said her father shouted at her and that as Lake attempted to introduce himself, Shannon Kepler shot Lake.

"I'm not scared of my dad," she said, in tears and openly wondering why he would shoot someone he didn't know.

Josh Mills, 23, a friend of Lake's, said he was also at the scene during the shooting. He said Shannon Kepler also fired a shot at Lake's 13-year-old brother, who was sitting on the front porch. The bullet ricocheted and grazed the boy in the upper arm, Mills said.

Mills said he had paramedic training and tried to stem Lake's bleeding and locate the bullet wounds. Mills said it appeared Lake had been shot in the chest and neck from about 3-feet away. Mills and Lake hadn't known each other long but had become close.

"He was like a brother to me for two weeks," Mills said, tearing up as he described how Lake died in his arms.

Lisa Kepler said her parents had kicked her out of their home recently because of poor "life decisions" she had made and dropped her off at the Tulsa Day Center for the Homeless. Lisa Kepler declined to say what those life decisions were.

"I really hope they rot in prison for a very long time," Lisa Kepler said of her parents.

A neighbor of the Kepler family, who wished not to be identified, said the husband and wife are "wonderful neighbors." She said the parents had "given and given" to their three daughters.

Friends and neighbors said the couple had adopted Lisa Kepler and her two siblings several years ago.

"They've done everything in the world for (Lisa)," the neighbor said.

She said Shannon and Gina Kepler were the type of neighbors who would shovel sidewalks or bring food over.

A second neighbor, who also asked for anonymity, said he was "tickled to death" two police officers lived nearby because it made the neighborhood feel secure. The neighbor said he didn't have a lot of interaction with the Keplers, whom he called "the perfect neighbors," but that Gina Kepler sometimes would stop in her patrol car and say hi to him.

"The whole neighborhood — it's unbelievable," the neighbor said when asked if he was surprised by the turn of events.

Lisa Kepler said the Day Center is where she met Lake, who offered to let her live with himself and his aunt, Pam Wilkins, within the past week. She said Lake was a sweet man and had been nothing but good to her since they had met.

Sandra Lewis, executive director of the Day Center, said Lake had never been a volunteer or employee with, nor a client of the center.

Lewis said she knew of Lake and that he "came around" sometimes. There weren't any incident reports involving him, she said. Lake would help carry in donations or pick up trash.

Wilkins, 50, said Lake had "a lot of love" for people, including those in the homeless community. She said her nephew was "the life of the party."

"No matter if we argued, he never let a day go by without saying, 'I love you,'" Wilkins said.

The couple are expected to be placed on paid administrative leave until they are charged, Roberson said.

Lake's death is the city's 27th homicide.
No comments: