Milo's police chief has been arrested on a domestic assault charge.

Gahagan isn't releasing details, but will say Poulin is on paid leave while an investigation is conducted.

Poulin was booked at the Piscataquis County Jail Friday night and was released on bail later that same night.

A former Greeley County Sheriff's Deputy and police officer in Ord Nebraska is accused in court documents of having sex with a mentally retarded woman who later gave birth to his child.

LeRoy Svoboda was charged last week in Hall County with first-degree sexual assault, but details of the case were not released.

An affidavit filed in the case says the 67-year-old Svoboda had sex with the woman in his former residence in Ord. She gave birth to a daughter on Jan. 26, and DNA testing showed Svoboda was the father.

A psychologist says in court documents that the 28-year-old woman is vulnerable and cannot give her consent for sex.

If convicted, Svoboda faces up to 50 years in prison.

Svoboda had been in law enforcement for more than 35 years.
No comments: 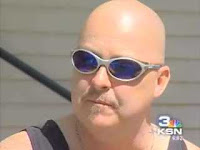 Hutchinson police are trying to determine if three officers used excessive force on a suspect after video surfaced of his arrest.

A police car videotape shows the arrest of Anthony White, 39, in his driveway on March 9, 2008. He was stopped for driving under the influence after he wrecked his motorcycle.

The video shows White being taken and held down by officers Bryan Rodriguez and Scott Perry, who left the department in August. Sgt. David Miller is then seen entering the garage.

Anthony White obtained the video from his attorney, who received it as evidence during the municipal court proceedings in the DUI case. White made it available to The Hutchinson News after attempts to find an attorney to represent him in a possible civil suit were unsuccessful.

The newspaper then showed it to police.

"This is the first time I've seen this," Hutchinson Police Capt. Troy Hoover said Wednesday. Hoover then began making calls to initiate an internal review of the situation.

"Although the video is initially very disturbing to watch, I don't want to make a judgment of what was going on based on what you can see in a dimly lit garage," Hoover said. "But it certainly is worthy of investigation."

Anthony White said he doesn't remember being kicked but he remembers being on the ground and hearing one of the officers tell the other to "choke him out" before briefly losing consciousness. What he next remembers, White said, is being lifted from the garage floor and seeing a puddle of blood on the cement below.

White eventually was taken out of the garage in handcuffs, bleeding from a cut above his right eye. He was arrested for DUI, obstruction and refusal to submit to a breath test, and taken to the hospital.

White pleaded guilty to the DUI charge, and the other charges were dismissed. He was sentenced to two days in jail, five days' house arrest, one year of probation and a $1,000 fine.

Lisa White said when she first saw the situation she was dumbfounded.

"I thought, 'Who did he kill?' " Lisa White said. "They don't just do that. All I know is the cops are in my garage, beating the hell out of my husband, and I had no idea why."

When she was informed that police had been responding to a report of an accident and the arrest was for DUI, she was even more confused.

"When I was told it's a possible DUI, this doesn't make sense," Lisa White said.

She said her husband was not struggling or yelling back at officers. In fact, while he was on the ground, he did not appear to be moving.

On Friday, Hoover said he expected the investigators will have turned in a report to him and Police Chief Dick Heitschmidt by Monday.

If an officer is found to have used unnecessary force with a suspect, "that is something I just won't tolerate, and I know the chief won't either," Hoover said.

A Denver Police officer accused of assaulting a teenager has been cleared of wrongdoing by a jury.

But Denver Police say they have a lot more investigating to do in the case of Juan Vasquez, the teenage boy who was seriously injured last April after a foot chase with police.

The officer accused of the beating, 13-year veteran Charles Porter, was cleared of first-degree assault March 12 by a jury that heard conflicting stories from officers about what happened the day Vasquez was beaten.

Now the department is trying to figure out who lied.

The case started last April when Vasquez, who was 16 at the time, ran from three officers pursuing him for a possible open-container violation.

During the resulting scuffle, one officer repeatedly jumped on the boy's back, causing serious internal injuries. The city of Denver ended up paying the boy $885,000 to settle a lawsuit over the beating.

In Porter's trial, the three officers gave different accounts of what happened.

Porter, 41, testified that he fell behind during the foot chase and that by the time he arrived, Officers Luis Rivera and Cameron Moerman had Vasquez on the ground, complaining he couldn't breathe.

"I don't know what happened that night. By the time I arrived, the juvenile was handcuffed and in custody," Porter testified.

The other officers, Rivera and Moerman, testified that they saw Porter jump on Vasquez and Rivera heard him say later the beating was "just something I do lately."

Vasquez gave conflicting testimony and seemed unsure which officer jumped on him.

Detective Rufino Trujillo, past president of the state chapter of the National Latino Peace Officers Association, told the newspaper that conflicting stories from the officers led to Porter's acquittal.

Trujillo said that with no clear physical evidence, prosecutors were relying on the credibility of officers Rivera and Moerman. Neither Moerman nor Rivera blamed Porter for the beating until they talked to internal affairs investigators six days after it happened.

"Their credibility was in question, and you were not going to get a conviction," Trujillo said.

Denver Assistant District Attorney Doug Jackson said the other two officers waited to come forward out of loyalty to a fellow officer, not because their story wasn't true.

"They didn't want themselves to be looked on unkindly by other officers for ratting out one of their senior officers," Jackson said.

Porter, who was suspended without pay, remains on suspension but is back on the department payroll. He will also recover salary withheld since he was arrested for assault last May.

Moerman and Rivera remain on duty.

The newspaper reported that the police department plans to continue investigating the beating, and that the FBI may intervene and bring federal civil-rights charges if a review turns up wrongdoing.

15-year-old Boy Dies after Being Tasered

Police in Michigan say a 15-year-old boy has died after being Tasered by officers who were trying to break up a fight.

A Bay City police news release says officers answered a report of an early morning fight on Sunday. The statement says two males were arguing in an apartment, and one of them "attempted to fight the officers."

Police say officers Tasered him, and his reaction led them to immediately call for emergency medical help. He was pronounced dead at Bay Regional Medical Center.

Email ThisBlogThis!Share to TwitterShare to FacebookShare to Pinterest
Labels: death from taser, Michigan
Newer Posts Older Posts Home
Subscribe to: Posts (Atom)
All person charged on this site with a crime are presumed innocent until proven guilty.