A police officer for the south suburb of Robbins was arrested Thursday and stripped of his police powers on unspecified felony charges, authorities said.

McGee had just completed working the 7 a.m.-3 p.m. shift when he was arrested, Holmes said. McGee's badge and pistol were taken and he was held pending an extradition hearing Friday morning at the Markham Courthouse, Holmes said.

Holmes said he was only told the charges related to McGee were felonies, and he declined to provide additional details.

Officials with the Lake County prosecutor's office were unavailable late Thursday.
No comments:

Email ThisBlogThis!Share to TwitterShare to FacebookShare to Pinterest
Labels: Illinois

Former Deputy Michael Boulware Chared with Having Sex with Minor 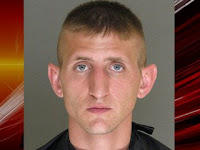 A former Sumter County deputy has now been charged with having sex with an underage girl.

Michael Boulware, 26, has been charged with second-degree criminal sexual conduct with a minor.

Arrests warrants claim Boulware had sex with a 14-year-old girl near the Wedgefield Community sometime between June 1 and June 30 of this year.

Deputies say Boulware gave alcohol to three people who were all under the age of seventeen. The claims were first reported on July 16, and Boulware was fired the next day after he was charged.

Boulware was a deputy assigned to the patrol division.
No comments:

Email ThisBlogThis!Share to TwitterShare to FacebookShare to Pinterest
Labels: contributing to delinquency of minor, Florida

Classey declined to discuss if there's an investigation into his conduct. But he reiterated earlier statements that some rank-and-file Police Department employees have resented him since he took over in October.

Scudiero said Zabijaka called the Benevolent Association to begin inquiries into the complaint.

"What we know for sure is the city has contracted with an attorney to investigate claims that one of our officers has made that there is harassment taking place from the chief toward her," Scudiero said.

"She felt uncomfortable around the chief," said Scudiero. "You can't just pass it off as an innocent, harmless act. I think it goes far beyond that. ... It was a situation where when she entered the building, the chief would run to find her. It's not the type of activity that's consistent with normal police department policy."

In April, Classey talked about tension in the department since he was promoted from captain to chief.

"People are going to look for things to fault me on," he said then.

On Wednesday, he said that should be considered in any complaint against his management of the department.

"I will reiterate those same comments," he said. "You've already got me on record with regards to what I had said in a previous situation about the changes in the department. Those situations remain current and in effect."

In response to a public records request this week, City Manager Jim Hanson said, "There are no public documents that you can get under public records [laws] at this point."

Scudiero said the latest complaint is more of a sign of tension between administrators and officers.

"Clearly there are some officers that have some concerns with what's going on there," he said.

Asked if the city is investigating complaints by Jackson against Classey, Hanson said, "I'm not going to discuss it. Any complaints about individual employees is not something I think would be appropriate to discuss with the press. ... I'm not even going to confirm or deny that there is such an investigation."

It's typical for labor unions to have hostility toward government administrators, Hanson said.

"We have had, over the years, a number of grievances filed by police officers as well as a number of employees from all departments. That's the nature of having unions," Hanson said.

Classey was subjected to one of the most thorough background checks in city history before he was hired in 2006 and his professional history is not consistent with any kind of misconduct, Hanson said.

Classey was hired with the intent of him starting as captain then becoming chief to replace David Thompson, who is now the assistant city manager.

Classey had been a lieutenant in the Kennesaw, Ga., Police Department outside Atlanta. He was hired after a nationwide search that included about 100 candidates for the Atlantic Beach post.
No comments:

A sheriff's deputy accused of attempting to solicit a prostitute bonded out of jail on Thursday.

Marion County Sheriff's Deputy Darious Harper was on leave during active duty with the National Guard.

But Orange County investigators arrested him after they said he offered to pay for sex with a known prostitute on Orange Blossom Trail.

The Marion County Sheriff's Office has launched an internal

Two DeKalb County police officers have been accused of running a criminal background check on Barack Obama. The DeKalb County Police Department was informed by the U.S. Secret Service that DeKalb County computers were used to run a query on Obama. It isn't known what motive the officers may have had, but the department says they have both been put on leave pending the outcome of the investigation.

Perhaps they were bored and thought it would be fun. Perhaps they thought that they might find, with a simple background check, things that thousands of reporters, conservative pundits and, yes, even members of the Democratic Party were unable to find. Whatever the case, it was a stupid move. (Great, the one time Obama could have actually called two cops "stupid" and been correct and he's busy drinking beer with another cop and an old college buddy.)

As a private investigator, I don't know how many hundreds of "backgrounds" I've researched on "Subjects" , as we call them, the hard way - going through court records, talking with friends, family and neighbors, tracking down any scrap of information I could find to piece together a picture of someone I was hired to investigate. Of course, there are online services where you pay a fee to get some information, but it's usually not anywhere near the same information you get through old fashioned "leg work".

That's not the case with law enforcement agencies. They use the National Crime Information Center (NCIC) to get a rundown on the person they're investigating. The thing is, they're only suppose to use that system when they are officially investigating someone. It might be as simple as a traffic stop by a uniformed police officer, but there has to be a legitimate reason to "run an NCIC". They are NOT suppose to use the system to just randomly check the backgrounds of individuals...and every cop knows that - every cop. They learn that in the academy about the time they learn to recite the "Miranda Rights".

Perhaps these guys were paid by someone who wanted them to dig up something on Obama. Or maybe they just wanted to see if they could unravel the riddle of where Obama was really born. It doesn't matter; what's done is done. The stupid thing was thinking they could do it and get away with it without anyone noticing. Yeah, there would have been no way for the Secret Service to trace a computer query on the President of The United States... right.

But here's a bigger question. Why is it illegal to check up on the president? Everytime I've ever covered or met with a U.S. President, or for that matter a foreign president, during my years a reporter, I've had to agree to a background check by the Secret Service - every single time. Now, I can understand that for reasons of national security, but if the guy is already sitting in the glass bowl, if he's paid by us and we put him there, what's wrong with anyone having the right to say, "Now, let's just see if you've ever shoplifted a candy bar or embezzled funds from an employer", no matter who he is or which side of the political aisle he comes from. I mean we already have the right to see his personal tax return each year. And I'm certain that the Russians have had ever detail they need about U.S. Presidents and their background information from the get-go. In fact, if you'll recall, we all saw more of Ronald Reagan than we bargained for when he had a colon exam. So, aside from that small matter of violating department policy, what was the real harm in a couple of cops checking up on the president?

Potential abuse - that's the problem. If people wearing sidearms and vested with the power to arrest aren't kept in check, some might take it upon themselves to abuse their power.

Email ThisBlogThis!Share to TwitterShare to FacebookShare to Pinterest
Labels: misconduct, unauthorized use of database A former Altoona police officer has been arrested on a theft charge for allegedly taking firearms from the police department's evidence locker.

Jeffery D. Holiday, 39, Altoona, was charged with second-degree of theft of property, Sheriff Todd Entrekin said in a news release.

Altoona Police Chief Anthony Davis said he asked the sheriff's department to investigate because it involved an employee in his department.

Davis said Holiday was served with a protection from abuse order and it was discovered a few days later that he had previously taken two firearms from the police department's evidence locker.

Holiday was employed with the Altoona Police Department at the time and was placed on suspension, Davis said. Holiday resigned July 7, he said.
No comments: