Thirty-five year old Richard Corbin is accused of giving alcohol to two teen girls, ages thirteen and fifteen, and then having sex with both.

The Pennsylvania State Police say Corbin faces several charges including statutory sexual assault, corruption of minors, and furnishing liquor to minors. They will not say, however, how the officer knew the two girls.

"All I know he was a city policeman who worked alot, he was in and out, he was real quiet, he never bothered anyone. It was a surprise when I heard about what was going on.",says Julie Jaskola, neighbor.

The New Castle Police Department did release a written statement saying they will not comment while this matter is in the courts.

Officer Corbin is on leave, and he's set to appear in Lawrence County Central Court next Wednesday for a preliminary hearing
No comments:

A female constable with the Edmonton police was charged with assault Thursday for allegedly kicking a suspect in the head during an arrest.

The police force said in a news release that the constable's unmarked police car was stolen while she was standing outside the vehicle looking for a robbery suspect in February 2007.

Two other officers located a male suspect nearby. He was not seriously hurt in the incident.

Celia Frattin, 38, was charged after the Professional Standards Branch received a complaint from a police department employee.
No comments:

A Clark University campus police officer, who also works as a police officer in Berlin, is facing sexual assault crimes in New Jersey for allegedly inappropriately touching and fondling a teenage girl last year at his family’s New Jersey home.

Daniel J. Smith, 26, of 1 Autumn St., has been placed on administrative suspension from his job as a part-time police officer in Berlin, a position he started in April, according to Berlin Police Chief Otto F. Rhode Jr.

According to Clark University officials, Officer Smith worked at Clark from June 2003 to July 2006, when he went to New York to become a police officer there. Officer Smith returned to Clark in September 2007. He is now on administrative leave from that job pending the investigation, according to Jack Foley, Clark vice president for government and community affairs and campus services.

Officer Smith will appear in Pequannock Municipal Court, in New Jersey, on Monday to face the sexual assault charges. So will his brother, Curtis Smith, who lives in Pequannock Township, where the family is from.

Yesterday, Officer Smith was brought to Central District Court on a fugitive from justice charge. He was arrested by Worcester police while heading to work at Clark Wednesday night, on a warrant from New Jersey.

The warrant, however, was recalled because Officer Smith’s mother posted his $75,000 bail Wednesday night. According to paperwork obtained by the Telegram & Gazette, Nationwide Bail Bonds posted the bail for Officer Smith. His mother paid $7,500 to the bail bond company.

The charge of being a fugitive from justice was dropped pre-arraignment yesterday, meaning it will not show up on Officer Smith’s record, according to Pequannock police. He was released and planned to head to New Jersey for his court appearance Monday.

Affidavits on file in the New Jersey courts allege Officer Smith started a relationship with a young teenage girl — she was 12 and 13 at the time of the alleged incidents — in summer 2007.

The girl would sleep over at the Smith home in Pequannock Township. Another girl also allegedly slept over at the home. Authorities allege Curtis Smith sexually assaulted the other teenage girl.

In a June interview with Pequannock detectives, the girl told them Daniel Smith would send text messages to her. The girl said she sent return messages and described the messages’ content as in a “flirting manner,” court affidavits said.

Officer Smith is accused of sending her numerous pictures of his genitals as well.

Court affidavits allege the relationship between Officer Smith and the girl first started with kissing and touching, but then progressed. He is accused of rubbing himself in a sexual manner on the girl, kissing her inappropriately and digitally raping her.

Witnesses told police they knew the girl slept over at the house starting in summer 2007.

Detectives interviewed Officer Smith on Tuesday after he voluntarily went to the police station. He told them the victim had a crush on him and he did text-message her. He allegedly said he spent time with her when she slept over but denied any sexual activity. He then left and returned here.

Arrest warrants were issued for the Smith brothers on Wednesday.

Curtis Smith is accused of raping the other girl who slept over at the family’s home, starting in summer 2007. He is accused of text-messaging the girl — 13 at the time of the allegations — and touching her inappropriately, court affidavits said. He is also accused of digitally raping her and making her touch him inappropriately.

Witnesses told investigators they saw Curtis Smith in bed with the alleged victim and on one occasion she was topless.

A Milwaukee police officer has been suspended after being accused of stealing money.

Jeffrey Buckson has been charged with two felony counts of misconduct in office and misdemeanors of theft and receiving or concealing stolen property.

The department set up a sting after other officers reported misconduct by the five-year veteran. Officers had a person loiter near a vehicle, prompting a search by Buckson and his partner.

A criminal complaint says the 44-year-old is accused of taking $100 from $530 in cash he and his partner found in the vehicle.

The pair seized the money and a gun, but Buckson only placed the gun and $430 in inventory.

The complaint says Buckson admitted taking the cash and said he was having money problems.
No comments: 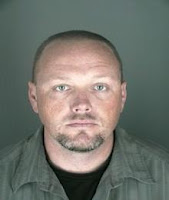 A Lafayette police officer was arrested on suspicion of giving his ex’s new boyfriend a traffic ticket, keeping both under “surveillance” and damaging the hood of her car during an argument, according to police reports.

James Edward Stafford, 34, turned himself in Wednesday. He was arrested by the Boulder County Sheriff’s Office on suspicion of harassment/stalking, official misconduct and criminal mischief related to domestic violence. The harassment count is a class 5 felony.

Because he’s charged with a felony, Stafford is on unpaid leave in accordance with Lafayette police policy. He was unreachable Thursday.

The ex-girlfriend, a manager at Sonic in Lafayette whose name wasn’t released, told police she met Stafford last summer and they had an on-and-off relationship. During part of that relationship, they lived together in her Broomfield apartment. For the last three months, the woman was dating a Sonic employee.

Stafford, while driving an unmarked Lafayette police truck equipped with warning sirens, gave the woman’s boyfriend a ticket for weaving. Stafford then sent the woman a text message that said, “Your boyfriend just received a ticket, ha ha,” according to the arrest affidavit.

Lafayette police have since cleared the ticket.

He also told police that he sent the text message to the woman because the two had become friends and he didn’t want her to be upset about the ticket.

Lafayette police weren’t able to recover video footage of the stop from the truck’s dash-mounted camera.

The other charges stem from various incidents.

Stafford tried to lure the boyfriend to the woman’s home, impersonating her in text messages, according to police reports. He also scared her by punching a pillow next to her head after accusing her of cheating, she told police.

In another incident, she told police she met Stafford and he started yelling at her in the street to “just hit me.” As she backed away in her car, she told police, Stafford jumped on the hood of her truck, denting the hood and breaking her bug shield.

In an interview with police, Stafford denied damaging the woman’s truck.

In June, the woman told police, Stafford called her boss at Sonic and told him to fire her because she was stealing money and dating an employee.

The Sonic employee told police he recently quit because he feared retaliation from Stafford.

The employee said he was “terrified” after receiving a text message from Stafford stating, “I will find you,” according to police reports. The employee also said Stafford later followed him and confronted him about his relationship with the woman, with Stafford telling him, “I will be watching you like a hawk.”

Before receiving the traffic ticket, the employee told police, Stafford left a note on his car in an apartment parking garage warning that it would be towed if it wasn’t moved.

Stafford has posted a $5,000 personal recognizance bond and was released Wednesday. Police also took 13 guns from Stafford’s home for safe keeping, including rifles, pistols and a shotgun.
No comments: