Officer Ernest Billiot Fired After Being Arrested on Sex Charges

Records show that the Delcambre Police officer who was arrested Monday on sex charges has a 1999 simple battery conviction, for which he was fired from the Jeanerette Police Department.

Ernest Billiot, 49, of Delcambre bonded out of jail Thursday night after a state police investigation led to his indictment and arrest on charges of sexual battery and malfeasance in office earlier this week.

The allegations against Billiot surfaced after a female motorist accused him of exhibiting criminal behavior when he stopped her while she was driving through Delcambre in the early-morning hours of Feb. 17, state police spokesman Trooper David Anderson said Thursday.

Billiot also has pending 2005 lawsuit against the city of Jeanerette and Mayor Arthur Verret that claims he was wrongfully terminated from the police department after 10 years of service.

The petition alleges that Verret had a personal vendetta against Billiot for arresting his grandson, Ben Boudreaux, and retaliated by getting him fired.

The petition states that Verret "initiated an evaluation of the Police department of Jeanerette and hired a consultant."

The consultant issued a report and made recommendations to Verret about changes that should be made to the department.

"One of the included recommendations was the terminating of Petitioner Ernest Billiot, due to the fact that Petitioner had a prior of conviction of Simple Battery," the petition states.

It was the opinion of the consultant that Billiot would not be able to carry a firearm to exercise his duties, thus resulting in the termination of Billiot, according to the lawsuit.

A fraud trial has begun for a Springfield police officer accused of making fake disability claims to the city and Liberty Mutual insurance company.

Opening statements were Friday morning in the trial of Anthony Trabal.

Prosecutors say Trabal submitted the claims for wages he lost during six months of unpaid leave that followed an off-duty car accident in 2004.

Liberty Mutual determined the disability certificates submitted to support Trabal's claim were fake, and the case was referred to state insurance fraud investigators.
No comments:

Email ThisBlogThis!Share to TwitterShare to FacebookShare to Pinterest
Labels: Fraud 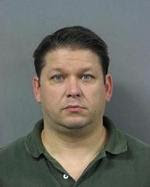 A reserve deputy with the Jefferson Parish Sheriff's Office has been arrested and booked with having pornography involving juveniles.

Col. John Fortunato, a spokesman for the sheriff's office, says White had pictures of child pornography on an internet account.

White had been a member of the reserve division since July 1999. He was assigned to the 1st District patrol division in Metairie but Fortunato says White's volunteer status was terminated after the investigation.

White was booked at the Jefferson Parish Correctional Center in Gretna. He was released on a $25,000 bond.

Information from: The Times-Picayune, http://www.timespicayune.com/

More Information on Officer Ron Jones Under Investigation for Assault

A city police officer is under investigation for an alleged assault while off duty at a Halloween weekend party west of Sand Springs.

As first reported on tulsaworld.com, Officer Ron Jones, an eight-year veteran of the Police Department, is on paid suspension while the city investigates the matter.

The Tulsa County Sheriff's Office is conducting its own investigation.

The Sheriff's Office said Jeffrey Scott Youngblood, 37, of Sand Springs suffered a concussion and a broken nose during a fight at the party and was hospitalized for two days.

The assault is alleged to have taken place about 1 a.m. Nov. 2 at the home of Joseph Christensen, who also is a Sand Springs police officer.

Other officers were at the party, and some of them have come forward as witnesses, officials said.

Authorities said Youngblood might have been intoxicated at the party and might have behaved inappropriately toward Jones' girlfriend and the wife of another officer.

When Jones interceded, a scuffle ensued, and Youngblood apparently was knocked to the floor. He was taken by private car to St. John Medical Center in Tulsa.

Sheriff's investigators have not yet questioned Jones.

Once he has been questioned, a report on the incident will be sent to the District Attorney's Office, Bowman said.

Jones' attorney, Scott Wood of Tulsa, said his client was acting in self-defense.

"Mr. Jones regrets the incident but feels justified in taking the action he did," Wood said, adding that he expects Jones to be exonerated.

Internal investigations by the Gainesville Police, announced Thursday, have shown that two former officers were having sex with prostitutes while on duty.

The investigation, which began after accusations were made against Cpl. William Billings, who resigned in August, also incriminated officer Dave Reveille, who was fired Wednesday.

“On June 4, a woman in jail called Internal Affairs asking us if we were trying to clear out bad cops,” Benck said at a press conference Thursday. “She told us that she knew Cpl. Billings was one of them.”

After a GPS tracking device was placed on Billings’ car, the investigation also found that he was not reporting to overtime assignments he was being paid for. That pay added up to more than $6,000, Benck said.

During Billings’ investigation, detectives received a tip that Reveille was also having sex with prostitutes while on duty, he said.

One witness reported that Reveille had taken her into custody in his car and told her she would go to jail if she didn’t perform oral sex on him, the report stated.

She also said Reveille had sex with her while she stood over the back of his GPD patrol car, the report stated.

Benck said similar reports against Reveille had been dropped during an investigation in 2005.

The State Attorney’s Office will review the cases before charges are made, GPD spokesman Keith Kameg said.

“The charges can range anywhere from grand theft, to prostitute issues, to sexual battery,” Kameg said.

Benck said at Thursday’s press conference that she wanted to take on the investigation because she didn’t believe the accusation against Billings could be true. After meeting Billings in police academy more than 21 years ago, she said she considered herself friends with both him and his wife.