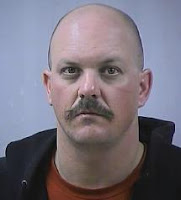 A San Antonio police officer was arrested Thursday night after a transgendered woman accused him of rape while the officer was on duty, authorities said.

Officer Craig Nash, 39, has been charged with sexual assault and official oppression. Bail was set at $27,500. He was released from Bexar County Jail after posting a bond. Police said Nash does not have a history of disciplinary action. He is the second San Antonio police officer arrested this year.

“This is a slap in the face to every good police officer, every command officer, to the public and to the victim,” said Police Chief William McManus, who was visibly frustrated as he announced Nash's arrest Friday morning. “This is about as hard a slap in the face as you could possibly get.”

McManus said the incident wasn't reflective of the department's culture but was instead the result of a single officer's bad behavior.

Nash, a seven-year police veteran, is accused of picking up the alleged victim shortly after 3 a.m. at Guadalupe and Zarzamora streets on the city's West Side, according to an arrest warrant affidavit.

The complainant, who authorities say is a prostitute, told police that Nash handcuffed her in the back of a marked patrol car before taking her to an unknown location and forcing her to engage in multiple sexual acts, the affidavit states. Nash reportedly was wearing his police uniform at the time.

The woman told police that after the assault occurred, the suspect dropped her off at a nearby school on Guadalupe Street.

The affidavit states that the woman then took a bus to a police substation to report the incident, telling officers Nash “wasn't going to get away with this.”

The affidavit states the complainant was able to pick Nash out of a police lineup and that police used a Global Positioning System to confirm that Nash's vehicle was in the area at the time of the alleged incident.

Nash has been placed on administrative leave with pay pending the outcome of an investigation.

“We will not for a second tolerate this or make any excuses on behalf of anyone who is found guilty of misconduct in this department,” McManus said.

At least 10 officers were effectively fired in 2009 from the department on allegations ranging from sexual assaults to indecent exposure to witness tampering. The amount represents more than twice the number of officers placed on indefinite suspension in 2008.
No comments:

An arrest warrant was issued Thursday for a Dallas police officer who is accused of illegally pointing his gun at a man and ordering him to his knees during an off-duty confrontation in July.

Senior Cpl. Mike Jones, who joined the department in 1999, faces a Class A misdemeanor charge of deadly conduct, an offense punishable by up to a year in jail and a $4,000 fine. Jones was placed on administrative leave on Wednesday. A conviction would cost him his job.

Jones, 42, was expected to turn himself in at the Dallas County Jail. He told police investigators that he ordered a man who was urinating on a wall at an apartment complex on Washington Avenue in Old East Dallas to stop. He said that when the man didn't follow his commands, and after he identified himself as a police officer, he drew his weapon and ordered Brandon Schroder, 23, to his knees.

The decision by prosecutors to pursue criminal charges against Jones immediately riled officers throughout the Dallas Police Department, with many saying Jones was being punished for simply doing his job.

"He did everything by the book," said White. "It's not like he clocked the guy in the back of the head, split the guy's head and left him. If someone does not comply with loud, clear verbal instructions, you go to plan B."

John Haring, Jones' attorney, said, "Officer Jones was only doing his job and he looks forward to presenting his side of the story in court."

The Dallas County district attorney's office declined to comment other than to say that prosecutors determined the facts of the case constituted deadly conduct.

"I can confirm that we made the decision that it was a misdemeanor offense, not a felony offense. There was no need to go to a grand jury," said First Assistant District Attorney Terri Moore.

Harvey Hedden, executive director of the International Law Enforcement Educators and Trainers Association, said the actions that Jones took do not appear to violate the training that police give law officers.

"To me, [the arrest] does seem like an overreaction and might have a chilling effect on how officers might interrupt criminal activity in their off-duty hours," Hedden said.

According to police records, the confrontation occurred about 6:45 p.m. at the AMLI at Cityplace apartments, where at the time Jones provided security work and had an apartment. Schroder and his friends had been drinking all day, the records state.

Jones wrote in his police report of the incident that he had just returned to the complex when he noticed a swimsuit-clad Schroder urinating on a wall. Jones, dressed in civilian clothing, told Schroder to stop and go somewhere else. Schroder continued to urinate, the report states.

Jones then identified himself as a Dallas police officer and displayed his badge. When Schroder ignored him, Jones wrote, he showed him his badge and was again ignored. Still showing his badge, he then pointed his service weapon at Schroder and ordered him to his knees.

Jones then wrote Schroder a ticket for urinating in public, an offense punishable by a fine. Information on what happened to the citation was unavailable.

Schroder, who didn't want to immediately comment on the case, filed a complaint with the police, telling investigators that Jones simply screamed at him to stop, pulled a gun on him and ordered him to his knees.

Jim Bristo, vice president of the Dallas Fraternal Order of Police, said it is not unusual for an officer to draw his weapon when lawful orders are ignored. "This all seems to be to be a witch hunt," he said.

Hedden said officers are trained that when confronting someone, even those committing a minor violation, they should draw their weapon if the person does not respond to verbal commands after a police officer identifies himself.

"It's better to have a weapon out and in hand than to have it in a holster especially in a situation where someone is acting suspiciously," said Hedden, a former police officer.

In off-duty situations, officers need to be even more cautious because they typically don't have a radio, baton, handcuffs or an easy way to call for backup, he said.

He also said ordering a violator to his knees or even to make him lie face-down is standard police procedure for controlling a suspect. "By putting themselves on their knees it makes them less likely to attack him and easier to control," Hedden said.
No comments:

Brian Macias Shot by His Father

The Los Angeles County Department of Coroner Friday identified the 17-year-old boy who was shot to death by his father in an unincorporated county area near Monrovia.

Brian Macias died Thursday night after his father fired on him during an argument inside a home in the 100 block of East Andre Street, Coroner's Assistant Chief Ed Winter said.

The boy's father is a reserve LAPD officer. He was not arrested, and authorities have not identified him.

They have said it appears to be self defense.

A group of young men who identified themselves as Macias' friends said Friday the teen was a senior at Monrovia High School.

They said said Macias aspired to go to college and become a police officer. They doubted that an argument between the teen and his father needed to end in death.

"He was always respectful to his father because his father was a cop and he wanted to be a cop," said Paul Gilbert, 17."He was just a nice kid, he didn't mean any harm to anybody."