Two Jefferson Parish sheriff's deputies have been fired and one faces criminal charges after authorities say one of them forced a female motorist to expose herself and the other deputy did not report it.

Clyde A. Clarke, 45, of 438 Holy Cross Place, Kenner, was booked with malfeasance in office after authorities claimed he forced an unidentified 26-year-old woman to expose herself to avoid arrest on two occasions. Demond T. Ferguson, 24, 1740 Hampton Drive, Harvey, was fired by the Sheriff's Office but was not arrested.

Col. John Fortunato, a spokesman for the Sheriff's Office, said that on Saturday, Clarke and Ferguson were traveling separately when they stopped the woman and her boyfriend on Ames Boulevard. During the traffic stop, the deputies determined that both were wanted on other traffic violations and arrested only the unidentified man.

The deputies allowed the woman to leave, but not before asking her to provide personal information, including a telephone number, Fortunato said. After Clarke took her boyfriend to jail, he telephoned the woman and told her to meet him outside her home.

When Clarke met the woman, he made her move into a dimly lit area and then demanded that she raise her skirt, Fortunato said. Clarke did not touch the woman, but when she returned to her home, he told her that the next time he called, she should not be wearing underwear.

The Sheriff's Office learned of the incident after the woman filed a complaint.

"If there's something that's criminal in nature (in a complaint), we immediately conduct an investigation," Sheriff Newell Normand said Thursday afternoon at a news conference in Harvey. He said Clarke's actions "constitute grounds for malfeasance."

Clarke joined the Sheriff's Office in 2004. Ferguson, who was fired for not preventing the incident and not reporting it, joined in 2006. Both men had worked at the parish correctional center before recently being assigned to patrol duties, Normand said.

Fortunato said the investigation has been turned over to the Jefferson Parish district attorney's office.
No comments:

Three New York Detectives Get Away With Murder 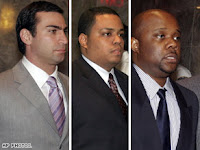 Sean Bell was killed just before dawn on his wedding day, November 25, 2006 by three detectives who fired over 50 rounds into his body. He and several friends were at an all-night bachelor party at the Kalua Club in Queens, a strip club that was under investigation by a NYPD undercover unit looking into complaints of guns, drugs, and prostitution.

Witnesses said around closing time, Bell and his friends left the club, and argument broke out. Believing that one of Bell’s friends, Joseph Guzman, was going to get a gun from Bell’s car, an undercover detective who was inside, followed the men and called for backup.

Bell, Guzman and Trent Benefield got into the car, with Bell at the wheel. The detectives drew their weapons, said Guzman and Benefield, who testified that they never heard the plainclothes detectives identify themselves as police.

Not knowing that the men were officers, Bell panicked to get away from the armed men, his friends testified. But the detectives thought Bell was trying to run down one of them, believed that their lives were in danger and started shooting, according to their lawyers. Not one shot to stop them, but over 50 bullets were fired by the NYPD officers.

After the verdict was read Nicole Paultre Bell bolted from the courtroom as a Judge acquitted the three New York City Detectives of all charges in the shooting death of her finance.

"I've got to get out of here," Paultre Bell said.

Justice Arthur Cooperman was announcing the verdict clearing Detectives Michael Oliver and Gescard Isnora of manslaughter, assault and reckless endangerment in the death of Sean Bell.

"What we saw in court today was not a miscarriage of justice," the Rev. Al Sharpton said on his radio program. "Justice didn't miscarry," he said. "This was an abortion of justice. Justice was aborted."

Sharpton, who has been advising Bell's family, had called for calm Wednesday.

The three officers made brief statements more than four hours after the verdict.

"I want to say sorry to Bell family for the tragedy," Cooper said.

Isnora thanked the judge "for his fair and accurate decision today."

Oliver praised Cooperman "for a fair and just decision."

That's not how one community leader viewed it.

"This case was not about justice," declared Leroy Gadsden, chair of the police/community relations committee of the Jamaica Branch NAACP. "This case was about the police having a right to be above the law. If the law was in effect here, if the judge had followed the law truly, these officers would have been found guilty.

"This court, unfortunately, is bankrupt when it comes to justice for people of color."

Many people outside the courthouse saw it differently.

"Fifty shots is murder. I don't care what you say. That's what it is," another woman said.

I have to agree 50 shots at anyone is murder.
1 comment: 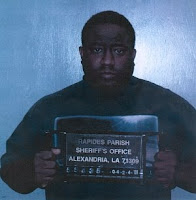 Pineville Police Officer Patrolman Raymond Eli Smith has been arrested in an undercover drug operation at a Pineville elementary school. Officer Smith, 37, has been booked with conspiracy to distribute powder cocaine and malfeasance in office.

In a ‘spur of the moment’ decision the Sheriffs office allowed an undercover operation to take place on school grounds. (What if something had gone wrong, and gunfire was exchanged? This was an on-duty police officer carrying a weapon.) Sheriff Charles Wagner said, “It was something we had to act on to take care of it to make sure that cocaine did not make it into the school.” (Still, I don’t think it was a good idea to possibly put the lives of our children at risk.)

Rapides Parish Sheriff Charles Wagner said Smith met with a informant working for authorities around 2 p.m. Wednesday in the parking lot at Lessie Moore Elementary School while Smith was on duty. The two talked of a trip to Detroit to sell and distribute cocaine, valued at $25,000, Wagner said. Because of a radio malfunction the conversation between Smith and the informant was broadcast on a police frequency.

“That could be an extremely serious problem,” Sheriff’s Assistant Chief Herman Walters said, referring to officer safety. “We need to sit down and talk with the officers involved and see if they did anything differently to try to determine what happened.”

According to the Associated Press, Smith was released from the Rapides Parish Jail on a $12,500 bond.

A Rapides Parish Sheriff’s Office corrections officer also has been arrested in connection with the undercover operation. Marcus Mandrell Taylor, 35, of Pineville, was booked with conspiracy to distribute powder cocaine.

Sheriff Chuck Wagner says Taylor has been with the department for seven years and is on administrative suspension without pay.
No comments:

A Washington Park police officer was arrested today on a warrant for two counts of second-degree statutory sodomy issued after police investigated a complaint of sexual misconduct involving a 14-year-old boy in St. Louis.

After a police investigation, the warrant was issued against McCoy, Jackson said.

The juvenile is an Illinois resident, Morrisey said.

The felony charges against McCoy are unrelated to his position as a Washington Park officer, Morrisey said.

Bill Wilkins, executive director of the housing authority, said McCoy worked for the housing authority for four years and five months. "During his tenure at the East St. Louis Housing Authority, he performed his duties appropriately and effectively," Wilkins said. "We did not receive any complaints from tenants."

"I hope the charges against him are not true. I have children and grandchildren. I knew he was a police officer, but I didn't know that much about him."

Email ThisBlogThis!Share to TwitterShare to FacebookShare to Pinterest
Labels: Illinois, statutory sodomy
Newer Posts Older Posts Home
Subscribe to: Posts (Atom)
All person charged on this site with a crime are presumed innocent until proven guilty.