A DeKalb County police lieutenant was arrested after officials said he hit his teenage daughter with a fishing rod.

Police said Lt. Willie Durrett, who was wearing his uniform and was on duty at the time, stopped by the house to drop off a birthday present for his son.

Durrett told officials he attempted to talk to his 16-year-old daughter after she disrespected him, but she slammed a door on his arm. He pushed open the door, causing her to fall back. Durrett said when his daughter grabbed a fishing rod, he took it from her and hit her with it.

The teen had lacerations on both arms and her lower back, according to officers on the scene.

Durrett has been placed on administrative leave, according to Mekka Parish with the DeKalb County Police Department.
No comments: 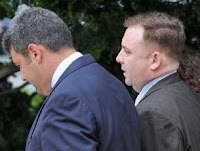 The Sandwich police officer accused of beating a man so severely he required 37 stitches to his face has a history of threatening the alleged victim, according to police reports.

Accompanied by attorney Jens Bahrawy and an unidentified woman, Sandwich police Officer Dennis Byrne pleaded not guilty to a charge of assault and battery with a dangerous weapon (blunt object) in Barnstable District Court yesterday.

Byrne, 38, has a "long history of conflict due to an ongoing relationship between Byrne's wife ... and (the alleged victim)," a police report states. The alleged victim told police Byrne's wife is a battered woman, adding that "Byrne is unstable and that he will eventually kill (his wife)."

The Sandwich officer has been on paid administrative leave since the morning the incident was reported. Byrne is due back in court for a pretrial hearing July 21.

On June 16 at about 10 p.m., Byrne's wife visited the alleged victim at his Route 6A home. Hours later during the early morning of June 17, Byrne arrived at the home and was invited inside, according to police.

According to a police report, the alleged victim eventually asked Byrne to leave his house but Byrne refused. Byrne then attacked the man after he had turned his back, striking him in the face multiple times, according to police.

Byrne's wife reportedly witnessed the alleged assault and called the state police barracks in Middleboro from a cell phone.

Although police could not identify the weapon used in the incident, the alleged victim said it looked like a dowel or roll of quarters. The man told police Byrne continued to hit him while he was down on the ground using the sides of his fists.

"(The alleged victim) also stated that Byrne would constantly tell (him) that he couldn't do anything about it because he was a cop," according to the police report.

When police asked the alleged victim whether the violent encounter was an isolated incident, the man said he had lost count of how many times Byrne had threatened to kill him. The man also said Byrne was often in uniform while making the alleged threats.

Byrne, his unidentified female companion and his attorney did not answer questions on their way out of the courthouse yesterday. If convicted of the felony charge, Byrne could face up to 2½ years in the Barnstable County Correctional Facility.

Byrne is on paid administrative leave pending an upcoming disciplinary hearing. Sandwich police Chief Michael Miller did not return a phone message yesterday seeking comment on the status of that hearing. Byrne earns $61,000 per year in regular pay, according to town records, and has been an officer in Sandwich for 10 years.
____________________
http://www.bostonherald.com/news/regional/view/20090709officer_pleads_not_guilty_to_assault/srvc=home&position=recent
No comments:

Family Paid $2.4 Million After Stanley Harlan Dies from Being Tasered 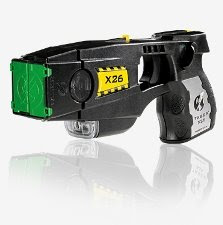 A Missouri municipality has agreed to pay $2.4 million to the family of a man who died after police shocked him several times with a Taser. The local police police department also agreed to suspend use of the controversial stun guns, which have been linked to hundreds of deaths nationwide by Amnesty International.

The Taser lawsuit settlement resolves a complaint filed against the city of Moberly over the death of Stanley Harlan, who was struck with a Taser three times for resisting attempts to handcuff him following a stop for suspected drunk driving. Harlan lost consciousness after being jolted with the stun gun and died a short time later.

Insurance coverage for the city will pay $2.4 million to Harlan’s family, including his infant son, as a result of the alleged police brutality and excessive use of force. City officials also agreed to enforce a moratorium on Taser use by the Moberly Police Department. In addition, Moberly police will be trained to recognize and respond to medical distress situations, and the city will provide at least one on-duty patrol unit with an automatic external defibrillator.

Taser guns are designed to incapacitate neuromuscular functions by delivering an electrical shock. Many law enforcement agencies use the weapons as an alternative to lethal force in situations where suspects pose a threat.

The city did not admit fault as part of the settlement, and no criminal charges have been filed against police officers. An investigation by the Missouri State Highway Patrol and the FBI found no evidence of criminal wrongdoing.

Last year, Amnesty International called for a police departments throughout the United States to stop using Taser guns or strictly limit their use to life-threatening situations. A report released last December by the human rights group linked 334 deaths to the use of Taser guns between 2001 and August 2008. Amnesty noted that 90% of the Taser deaths examined involved people who were unarmed and did not appear to present a serious threat to the officers. A large number of the fatalities involved misuse of the weapons, including multiple Taser shocks or exposing suspects to prolonged shocks.

Taser International, which manufactures the controversial stun guns, has maintained that the weapons are safe and non-lethal devices. They were not a party to the lawsuit or the settlement.
No comments:

The use of tasers by law enforcement is becoming increasingly controversial as more examples emerge of them being used improperly and causing victims serious harm. This New Mexico teen was arguing with her mother, so her mother brought her to a police station to get help (it's unclear what kind of argument they could have been having that would warrant police intervention).

The girl ran off and the police chief chased her and ordered her to stop. When she didn't, he tasered her in the head. The giant scar and stitches in the teen's head show the tasering was terribly brutal, and it's difficult to see how this could in any way be justified.
_______________
Information and Video: http://vivirlatino.com/2009/07/08/girl-tasered-in-new-mexico.php
No comments:

Email ThisBlogThis!Share to TwitterShare to FacebookShare to Pinterest
Labels: New Mexico, Tasered
Newer Posts Older Posts Home
Subscribe to: Posts (Atom)
All person charged on this site with a crime are presumed innocent until proven guilty.