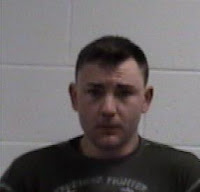 It was at 117 Lynn Street in McRae where White County Sheriff Deputies say Patrick West beat his 5-month-old stepson. It happened Monday.

According to officers, the baby stopped breathing and that's when West called 911. After a series of tests, doctors learned the child suffered multiple skull fractures.

He's on life support at Arkansas Children's Hospital where doctors are remaining hopeful, but so far officers say the baby hasn't shown any signs of activity.

Police say this is the first time the mother left the child alone with West. And what's even more shocking is the couple was just married last Friday and she is eight weeks pregnant.

Detective Brandon Grimes says, "She says she has no clue. She acts fairly devastated about the whole situation of course."

Deputies arrested West, a military police officer, who also has served time in Iraq. He's charged with 1st Degree Battery and has since posted a $100,000 bond.

Grimes says, "Of course if the child passes the charges will be amended. You would think somebody in that position would be more cautious in things and taken care of a child when they have seen so much devastation."

"They're amazed really. I mean they didn't suspect it at all," Grimes explains.

The mother, who is also in the military, is not a suspect.

WTF is wrong with people?!?! When my boys were little, I never once considered hitting them hard enough it could injury them in any way, no matter what they did. And my boys have done some really crazy, stupid things in their life. I just don't understand people who can do this kind of thing to a child. Yell at them, send them to their rooms, put them in a corner, whatever, but you don't have to hurt them. I've never once hit my boys in a way that could cause them harm. What a shame that this had to happen. Hopefully the little boy will recover.
4 comments:

Police said the first message threatened the manager at the store where Officer Eagley’s girlfriend, Susan Foley, had been suspended for poor job performance.

The text message said, “Tell Anthony he is done. If I pull him over, I’m dragging him out of the car and beating the fuck out of him. I’m dead serious.”

A second message arrived a moment later, just before noon on March 13, telling Art Sider to relay the message. Sider took the phone and showed it to the Millcreek police, who photographed the messages.

Officer Eagley was arrested Friday, after other officers reviewed telephone records. He was charged with official oppression and making terrorist threats. He was arraigned before District Judge Paul Manzi of Millcreek and was released after posting a $10,000 bond.

The Police Chief Richard E. Andrews would only say that Officer Eagley sent the messages while off duty, and that the matter was investigated by the department’s internal affairs unit. Officer Eagley has also been suspended.
No comments: