A Pennsylvania municipal official accused of raping a woman in Baltimore was found dead yesterday after an apparent suicide in upstate New York, authorities said.

Michael L. Johnson Jr., 40, of York, Pa., shot himself in the head and chest after fleeing U.S. marshals and hiding in the closet of an apartment in Cohoes, N.Y., law enforcement officials said.

Federal authorities and local police were closing in on Johnson when they heard gunshots come from a room the fugitive had locked himself into, according to Gary Mattison, supervisor of the Albany, N.Y., division of the U.S. Marshals Service.

About an hour later, officers knocked down the door and found Johnson, Mattison said. He is believed to have died at the scene, authorities said.

Johnson, president of the Penn Township Board of Commissioners, disappeared about two weeks ago after he was released on $100,000 bail after being charged with raping a Baltimore woman. Police eventually linked Johnson to two other rapes in York, where he had served as a police officer. In each incident, he is accused of posing as a police officer and raping a woman in a minivan.

According to court documents, Johnson, a York police officer from 1994 to 1999, was born in Baltimore and was an Army veteran. He was also a married father of two who ran for Congress in 2002.

Police said Johnson picked up a 21-year-old woman in the Baltimore Highlands area Nov. 2 and told her he was arresting her for prostitution as part of a sting operation. According to court records, he handcuffed her to the back seat of a minivan, drove her to an industrial area in the rear of the 4400 block of E. Monument St. and sexually assaulted her.

The victim gave investigators a license plate number and a description of the silver van, information that led to Johnson's arrest after a two-hour standoff. Although he was released on bail, Johnson was to turn himself in after allegations of the two other rapes. But he failed to do so and had been on the run since.

Nathan Vaughn Dies After Being Tasered

A man died Saturday after a Sonoma County sheriff's deputy responding to a violent attack in a Santa Rosa home stunned him three times with a Taser, according to the sheriff's office.

Nathan Vaughn, 39, was throwing and breaking things in a home on Brighton Drive when the deputy arrived at the house, the sheriff's office said in a statement Sunday. The deputy stunned Vaughn once, then hit him twice more when Vaughn continued to fight.

The deputy, who has not been named, was able to handcuff Vaughn, but shortly thereafter Vaughn showed signs of medical problems, according to the sheriff's office. An ambulance crew already on the scene treated Vaughn and took him to Kaiser Permanente Medical Center, where he was pronounced dead.

The incident started at about 10:30 a.m. Saturday when Vaughn's mother, Doris Vaughn, called 911 and told a dispatcher that her son was very violent and was destroying the house and hitting his dad, according to the sheriff's department.

Vaughn's father, Ronald Vaughn, suffered multiple cuts and bruises in the incident, none of which required immediate medical attention, according to the sheriff's department.

Investigators later learned that deputies had responded to another disturbance at the same house at 4:30 a.m. Friday. No one was arrested in that incident, but Nathan Vaughn was taken from the home to stay with friends.

Shortly after deputies left Vaughn, he went to a pay phone and made several calls to 911 but hung up on dispatchers, according to the sheriff's office. Deputies then arrested Vaughn for making repeated, unnecessary emergency calls. Vaughn was cited and released from Sonoma County Jail at about 1:30 p.m. Friday.

Vaughn had an extensive history of arrests and convictions in a 15-page criminal history report, according to the sheriff's office. He had been convicted multiple times for drug possession and being under the influence. He also had several theft-related convictions and had served time in state prison for burglary, according to the sheriff's office.

Because Vaughn's death happened while he was in custody of the sheriff's department, the incident is being handled by another law enforcement agency, the Petaluma Police Department.
3 comments:

Email ThisBlogThis!Share to TwitterShare to FacebookShare to Pinterest
Labels: death from taser, Tasered

Relatives of a now former state trooper arrested last month on allegations of trying to distribute cocaine are offering to use personal property as collateral to post his $500,000 bond.

According to court documents, Jesus Rafael Larrazolo's aunt and uncle said they were willing to pledge land valued at $454,842 as collateral for his release.

Larrazolo, 35, the now former Texas Department of Public Safety trooper, is set to be arraigned next month on a count of possession with intent to distribute following his Dec. 18 indictment by a federal grand jury.

According to the indictment, the violation involved five kilograms or more of a mixture and substance containing a detectable amount of cocaine.

Larrazolo was arrested Nov. 21 in the parking lot of Best Buy in Brownsville as he was loading his car with cocaine. He had just received the cocaine from another man, who fled the scene, Brownsville police said.

Brownsville police were conducting an unrelated surveillance when they saw Larrazolo with suspicious suitcases that carried the cocaine, according to police.

Larrazolo's relatives, Jorge Emilio Larrazolo Rubio and Concepcion Elisa Martinez Islas said they would not pledge their property if they believed their nephew was a flight risk, according to court documents.

The real estate property is the only U.S. assets the aunt and uncle have, court documents state.

"Mr. and Mrs. Larrazolo would not pledge their property to post defendant's bond unless they were absolutely sure the defendant will present himself in court to answer the charges that are pending against him," the document reads.

The motion to reconsider bond was filed before U.S. Magistrate Felix Recio. As of Monday, Recio had not ruled on the motion.

Although pre-trial services during a Nov. 26, detention hearing recommended Jesus Rafael Larrazolo's bond be set at $100,000, Recio declined the recommendation and set the $500,000 bond.

During that hearing, assistant U.S. Attorney James Lancaster asked that the former trooper be held without bond because of fears he would flee to Mexico.

FBI authorities earlier said that Jesus Rafael Larrazolo's family ties in Mexico are powerful and wealthy enough that they would allow him to disappear.
2 comments:

Baltimore County Police have arrested a Maryland State trooper for allegedly abducting a man and driving while intoxicated.

Police say Trooper Bruce Wrzosek abducted a man at a Taco Bell in Towson early Saturday morning. When police caught up with the trooper near his home, police say he had alcohol on his breath.

The county's investigation showed there was no reason for Wrzosek to force the 20-year-old man into his car at the restaurant's parking lot. The trooper is charged with DUI, false imprisonment and eluding police.

During the incident, police say Wrzosek was dressed in plain clothes but was driving his police car. 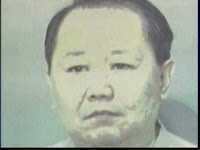 According to the FBI, investigators had been watching Kam Ng for more than a month after receiving tips from informants.

An informant told investigators that Ng, 53, had said that he wanted to rob a restaurant before Christmas to "spread some holiday cheer," Kocot reported. Ng also allegedly told the informant that his "training as a police officer" would give him a "big advantage."

Ng worked as an officer with the Columbus Division of Police until 1985.

The FBI said that Ng was plotting to hold up armored cars because he knew the best time and day to strike "when police presence is light," Kocot reported.

Federal agents also claimed that Ng conducted surveillance at nearly half-dozen Asian restaurants and wanted to obtain a .22-caliber pistol with a silencer. Court records allege that Ng told an informant that he would use a weapon if robbery victims failed to follow his orders.

Ng was arrested Saturday outside a Columbus restaurant. The FBI said he was in possession of a loaded handgun, a ski mask and a stun gun at the time of his arrest, Kocot reported.

Agents said that Ng told them that the alleged scheme was nothing more than a "big joke." An informant said that Ng said he was broke and needed money, according to the FBI.

Email ThisBlogThis!Share to TwitterShare to FacebookShare to Pinterest
Labels: Armed Robbery, robbery
Newer Posts Older Posts Home
Subscribe to: Posts (Atom)
All person charged on this site with a crime are presumed innocent until proven guilty.