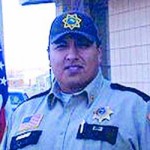 An early morning bar fight lands a Montana sheriff on the wrong side of the law. He’s facing four misdemeanor charges. We talked with the man who says the sheriff walked up to him, tossed him into a window and took off.

The Roosevelt County sheriff was arrested after a bar fight in Lewistown early Tuesday morning.

Lewistown Police Department says they were called to the Montana Tavern just after midnight. A bartender told them Sheriff Crawford threw another patron through a window, then ran away.

That 48-year-old Pennsylvania man was taken to the hospital, treated and released.
1 comment:

Email ThisBlogThis!Share to TwitterShare to FacebookShare to Pinterest
Newer Posts Older Posts Home
Subscribe to: Posts (Atom)
All person charged on this site with a crime are presumed innocent until proven guilty.