A West Tennessee police officer faces federal drug charges and is accused of selling the pain killer hydrocodone to youngsters at a drive-in restaurant.

William Patrick Jordan, an officer with the Bolivar Police Department, faces charges filed by federal prosecutors in Memphis on Friday.

An affidavit from an officer with the West Tennessee Drug Task Force says Jordan bought tablets of the powerful painkilling drug from an undercover informant. The affidavit also says authorities began investigating Jordan on reports he was selling drugs to "young girls at a Sonic Drive-in in Bolivar."

Courts records say Jordan will be represented by a public defender but did not indicate if one had been appointed for him. He does not have a listed phone number in Bolivar.
No comments:

A Dallas police officer was indicted Monday on charges he planned and carried out a June robbery at a Red Bird-area Sam’s Club where he worked off-duty security.

Officer Alph Coleman is charged with aggravated robbery in the June 27 incident at the store in the 2900 block of West Wheatland Road, police said. He was arrested in August and released on bail.

Officer Coleman, 29, was in uniform and working at the store that night when a masked gunman entered and held him at gunpoint, the officer told investigators. The robbery failed when employees locked themselves in a storage room and refused to give the suspects access to the vault.

Investigators ultimately identified holes in Officer Coleman’s story and have said they have phone records indicating the officer and getaway driver were in contact shortly before the crime.

Floyd Gibson Jr., 37, and Christopher Johnson, 26, were also indicted on aggravated robbery charges. Mr. Gibson and Cecil Rosemond, 35, were indicted on a charge of conspiracy to commit robbery.

A decision will be made on whether to fire Officer Coleman once an administrative investigation is completed. He has been with the Police Department since 2004 and has no history of disciplinary problems, police said. 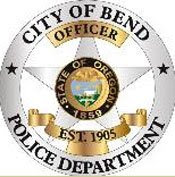 An off-duty Bend police officer was arrested in Pullman, Wash., over the weekend on a charge of failure to obey an officer, Bend's police chief confirmed Monday afternoon.

Erick Supplee, 32, was arrested early Saturday morning and taken to the Pullman city jail on the misdemeanor charge, then released on his own recognizance, a police officer said.

An officer said he was on foot patrol on College Hill when he saw a man driving the wrong way on Ruby Street. The officer says he approached the vehicle and yelled at the man to stop, at which times he allegedly sped off.

Other police patrol cars stopped the driver minutes later, a few blocks away.

Officers say Supplee smelled of alcohol but noted he did not appear intoxicated. Supplee refused to take a Breathalyzer or field sobriety test, they said.

Bend Interim Police Chief Sandi Baxter said Supplee has been on the force for just over 5 ½ years.

"He is continuing to work," she said. "There are two different processes. One is a criminal investigation. That is to be completed up there (in Pullman). We are initiating an internal affairs investigation."

"We are not making any pre-judgments here," Baxter said, noting they were in the "initial stages of investigation" regarding the incident.

Jury selection for a former Marysville police officer accused of propositioning and molesting girls ages 12 to 19 is to begin today in Perry County Court, despite attempts by the former officer's attorney to have the trial moved.

President Judge Kathy A. Morrow said she was not convinced the media coverage in the case involving Robert J. Pavlovich Jr., 40, of Lower Allen Twp., has been "inherently prejudicial."

"The court believes defendant has not shown that he is unable to impanel a fair and impartial jury from residents of Perry County," Morrow wrote last week in a two-page opinion.

Pavlovich's trial is to begin Wednesday and last for three days.

Morrow said that the judge presiding over the jury selection -- Senior Judge C. Joseph Rehkamp -- will have the final say over whether the trial should be moved. That would happen if it is demonstrated that potential jurors cannot be impartial during interviews today, Morrow said.

The test for moving the trial is whether the publicity regarding the case has been "sensational, inflammatory or slanted towards conviction rather than factual and objective," Morrow said.

Pavlovich was charged with involuntary deviate sexual intercourse, unlawful contact with minors, sexual assault and 21 other counts from between July 2002 and March 2003.

Morrow refused a request by Pavlovich's attorney, P. Richard Wagner, to throw out eight of the 24 charges against his client, including one involving a girl who claims she blacked out at a drinking party and didn't remember anything sexual occurring with Pavlovich.

Pavlovich was arrested in October 2007 and was fired by Marysville the next month. He is free on $250,000 bail.