An Oklahoma sheriff's deputy resigned Wednesday after two women said he sexually assaulted them at a Tulsa County home while he was on duty, a case that comes on the heels of a state trooper and an Oklahoma City police officer being arrested on sexual assault complaints.

Tulsa County Deputy Gerald Nuckolls, 26, was arrested late Tuesday on complaints of sexual assault and battery and indecent exposure. He remained jailed on $125,000 bond Wednesday. It's not clear from jail records whether Nuckolls has an attorney.

Undersheriff Tim Albin said Nuckolls resigned after being placed on unpaid leave. Nuckolls hasn't been formally charged, and authorities believe there could be at least five more women who have yet to come forward.

"It's been a real punch in the gut for us," Albin said at a news conference. "There's a real sense of betrayal for us on this."

Nuckolls' arrest came a day after Oklahoma State Trooper Eric Roberts was arrested on complaints of kidnapping, rape and other crimes. Roberts is accused of sexually assaulting three women while on duty.

The recent allegations against the three lawmen are among similar complaints lodged against Oklahoma officers in the past decade.

In 2011, Delaware County commissioners agreed to a $13.5 million settlement after 15 women complained they were raped, sexually assaulted or fondled by their jailers. In 2009, Custer County Sheriff Mike Burgess was sentenced to 79 years for sexual assaults against an inmate and the county agreed to pay about $10 million to settle claims by more than a dozen women.

Former Latimer County Sheriff Melvin Holly was sentenced to 25 years for sexual crimes, including abusing a 19-year-old inmate in 2004 and warning her she would "end up dead somewhere, floating face-down in a river" if she ever reported what happened to the authorities. A settlement with at least 16 women totaled around $670,000.

Nuckolls, who had worked for the sheriff's office for two years, showed up at the women's home investigating a 911 hang-up call about halfway through his shift, according to his arrest and booking report.

The report alleges that Nuckolls pulled one of women inside his patrol SUV and eventually exposed his genitals to her. The woman said she began rubbing the officer's genitals because he told her that it would keep her boyfriend out of jail.

Nuckolls then got out of the SUV and asked a second woman at the house asked if she had drugs inside, according to the report. The woman gave Nuckolls permission to search her residence and he found nothing. She told detectives that Nuckolls urinated near her garage and then went inside the garage with her, making small talk.

Nuckolls asked the woman about her tattoos and if she was wearing a bra, and then reached up and pulled her dress down, according to the report.

The woman said she pulled her dress up as Nuckolls began to touch his genitals. She said she told him she wanted to leave and go back inside and that Nuckolls said he would return when his shift ended at 8 a.m.

The report says Nuckolls told detectives who interviewed him that "he has a problem for pretty women" and that "sexual type activity has occurred" during encounters with about six women on traffic stops or calls.

Missy Iski, director of programs and counseling at DVIS/Call Rape in Tulsa, said Wednesday that potential victims may be reluctant to come forward especially when a law officer is alleged to have been involved.

"When you add a law enforcement person, it even adds to the difficulty," Iski said.
No comments: 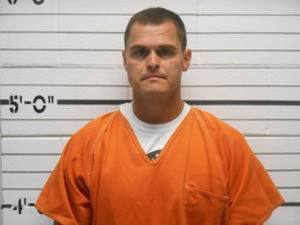 Eric Roberts was arrested Monday in Creek County. The Oklahoma Highway Patrol trooper was jailed in connection with sexual assault and kidnapping complaints.


The leader of the Oklahoma Highway Patrol said his agency is sickened after the arrest Monday of a trooper on sexual assault complaints.

An investigation was being presented to the Creek County district attorney’s office for review, Col. Ricky Adams, the Oklahoma Highway Patrol’s chief, said during a news conference Monday afternoon in Oklahoma City.

“This particular matter sickens us as an agency,” Adams said.

The incident marks the second high-profile case during recent months in which a law enforcement officer was arrested on sexual assault complaints.

Oklahoma City police officer Daniel Holtzclaw was arrested last month and accused of groping and raping several women while he was on duty in northeast Oklahoma City.

In Roberts’ case, the patrol started an internal investigation after a woman called the agency on July 23 and reported that she had been sexually assaulted during a traffic stop, Adams said.

Roberts was suspended with pay July 24.

Two of the women are considered victims of rape, and the third woman is considered a victim of inappropriate physical contact during a traffic stop, patrol Capt. George Brown said in an email.

The incidents in question occurred during the daytime in the Sapulpa area, Adams said, adding that during all of the stops, Roberts turned off his camera and his microphone.

In a civil lawsuit filed last month, one woman accused Roberts of raping her during a traffic stop in July.

The lawsuit alleges that Roberts made the woman get into his patrol car and asked her inappropriate questions before driving to a secluded area and assaulting her.

The lawsuit was later amended to include a second woman who came forward with similar allegations.

The woman contended that Roberts made inappropriate comments to her during a traffic stop in July and drove her to a secluded location where he sexually assaulted her, according to an amended complaint.

Roberts’ attorney, Gary James, said the criminal allegations that were made against his client are untrue.

“He is innocent of these allegations,” James said.

Kevin Adams, an attorney for the women in the civil case, said Monday “it’s about time” Roberts was arrested.

“They allowed a guy that they have alleged is a serial sex offender to be out on the street for two months,” Kevin Adams said.

“To me, that’s a little troubling. I think if he would not have been law enforcement, that they would have arrested him a long time ago.”

“I think he was actually probably treated harsher because he was law enforcement,” James said.

Roberts is the second trooper in a little more than a year to face sexual assault allegations.

Last year, former Oklahoma Highway Patrol trooper Patrick Venable pleaded guilty to a felony count of aggravated assault and battery after he was accused of having sex with a woman he stopped while on duty.
No comments: