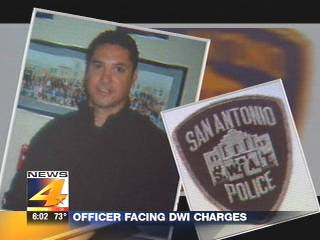 A San Antonio S.W.A.T. Officer was arrested this weekend for driving drunk while in his unmarked police car. Austin police stopped the 42 year old veteran police officer who was in town for a SWAT conference.

Officer Guillermo Cantu is an 18-year veteran of the San Antonio Police Department and a member of the Special Operations Unit. (Who should have known better. I’m sure he has arrested others for the same crime.)

Gabe Trevino, a spokesman for the San Antonio Police Department said, “The arresting officer felt he was intoxicated. While at the conference, Officer Cantu was involved with drinking. He then got into the city vehicle that he was assigned to at the conference and got stopped.”

(Maybe he should have let one of the other two officers in the car with him drive? Or where they drunk too?)

San Antonio Police Department officials refused to comment about the details of Cantu's D.W.I. arrest, but said they are conducting their own investigation.

"If he was found to be guilty, then, of course, we'll address that appropriately," Trevino said.

Officer Cantu bonded out of jail in Austin. He's been placed on administrative duty, pending completion of the investigation.

Okay I found out from another person that this officer had recently lost his mother due to cancer. I do feel for him. Death is not a nice thing and is very hard to deal with. Still, you can’t drive drunk...that is the law. Don’t you think that maybe some of the other people that he has stopped for the same thing, might have had an good excuse too? There is no excuse for drunk driving. He should have known better since he is supposed to be a role model for society.

I don’t think he needs to lose his job for this either...maybe make him go around lecturing to others about drunk driving and what he will now have to go through because he made the wrong choice.
1 comment: