A former New York City police officer has been sentenced to five years in prison for stealing handguns from a police evidence room and trading them for painkillers.

Hubertus Vannes, of Roslyn Heights, N.Y., pleaded guilty in May to criminal possession of a controlled substance and criminal sale of a firearm. He had been an NYPD officer for two years when he was arrested last fall.

Prosecutors say Vannes admitted trading three stolen guns to a man for painkillers. He had 76 tablets of prescription painkillers in his possession when he was arrested.

The report says he was going 19 miles above the speed limit. Police Chief Tony Coffman says when Officer Ramsey pulled him over, "he smelled odor of alcohol from the vehicle."

Ramsey declined to talk to THV, but according to his report, Littleton asked him if he could show him "professional courtesy and let him go."

"You have ordinary citizens that say 'come on man give me a break, let me go'," says Coffman.

According to the report, Littleton says he had four drinks that day. He says "he had three drinks this evening and one drink for lunch."

During one of the sobriety tests, he was swaying and "had leg tremors during the test."

Once at the police station, Ramsey writes, "several times he was on the phone and I could hear the other party yelling obscenities about me arresting him and not letting him go. Mr. Littleton made the comment to me that if I came through Little Rock that I would be taken care of."

Coffman says he does not consider this a threat.

"DWI is a pretty serious offense and nobody wants one. It doesn't matter if it's the general public or police officer," says Coffman.

Coffman commends his officer for doing the right thing.

"Officer Ramsey went by what the law said, and went by the rules," says Coffman.

Little Rock police are investigating the incident and would not comment on the case. However, they did say, Littleton was driving a city vehicle at the time he was pulled over and is banned from driving one until the investigation is over.

He appears before a judge November 20th at the Bryant District Court. 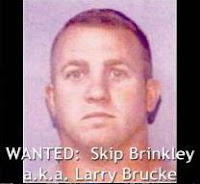 All day, hundreds of federal, state and local investigators searched unsuccessfully in woods off winding roads for Larry Wayne Brucke Jr., an Iraq War veteran, who recently changed his name to Skip Brinkley. Authorities described him Sunday as “very dangerous.” He is accused of shooting Det. Adam Klutz in the head after he responded to a 911 hang-up call about 9:40 p.m. Friday. Klutz died early Saturday.

Lt. Chris Martin, who arrived moments later to back up Klutz, also was shot three times. He was spared serious injuries by his bullet proof vest.

Authorities Sunday said they believe Brinkley is armed at least with an assault rifle and he is now believed to be on foot or in a vehicle. After two days of searching, they had found no evidence indicating he was nearby. They said they weren't sure if he had been injured when Martin returned fire.

There were initial reports that he possibly rode off on a horse from the farm he lives on at Fox Winkler Road. But that horse was accounted for on Sunday, said Det. B.J. Fore, a spokesman for the Caldwell County Sheriff's Office.

Investigators declined to provide a recording of the 911 hang-up call and other calls possibly made after the shootings. They also couldn't say whether there had ever been reports of trouble at the home nestled among rolling hills off N.C. 64.

Dozens of police vehicles blocked access to the area Sunday where volunteers turned the Oak Hill Community Ruritan Club into a makeshift dining hall for searchers. Residents rolled out homemade pies while others grilled burgers and served fries to heavily-armed deputies with camouflage-painted faces.

By nightfall, authorities halted the search operation. But today there will be additional security at the nearby Oak Hill Elementary school and armed officers riding school buses, officials said.

He declined to give any details about what may have prompted the 911 call. Brinkley's fiancée and two children who were in the home at the time, were not injured, Fore said.

He used to patrol the area and said he wasn't familiar with Brinkley, who had been in Caldwell County only for about a year.

Brinkley grew up in Walhalla, S.C., west of Greenville. His father, Larry Wayne Brucke Sr. told WCNC-TV, the Charlotte Observer's news partner, that he joined the Army right out of high school. He served at Fort Campbell, Ky., and in Iraq as an infantry soldier from 2004 to 2006. Authorities couldn't specify when he received Ranger training, or whether he completed it.

In addition to his military training, Brinkley completed basic law enforcement training in North Carolina and served as a police officer in Seneca, S.C., before joining the National Guard. His father told WCNC he served about a year in the Guard before getting out. His father said he was not aware of any troubles during Brinkley's military service.

Brinkley, who only recently changed his name, had been working most recently as a part-time truck driver and had a large construction project underway behind the home on Fox Winkler Road.

Friday's shooting was the second time recently that a suspect took aim at members of the Caldwell County Sheriff's Office. Earlier this month, two deputies were shot while serving a search warrant. The deputies, who were wearing bulletproof vests, weren't seriously hurt.

“This has been a rough few weeks for this department,” Fore said. “Our department is hurting, but we are carrying on with this investigation, out of pride and for Adam.”

A Lowndes County deputy is facing indecency charges after exposing himself to children. 38-year-old Michael Anthony James surrendered to authorities at the Valdosta Police Department Friday after warrants were issued for his arrest.

The incident happened September 11th in the 2500 block of Forrestwood Drive. Around 3:20 that afternoon, a child walking home from a bus stop reported seeing a naked man standing exposed in his front doorway.

"If a child sees anything like that, they should immediately report it to a responsible adult as these children did. And that way action can be taken immediately. These children did real good about telling a parent or another adult," said Lt. Bobbi McGraw with the Valdosta Police Department.

James was charged with two counts of public indecency. He was released on a two-thousand dollar bond.
No comments:

Authorities say a 9-year-old boy has died about a week after his father, a Chicago police officer, shot his two children in a murder-suicide.

Chicago police have said the shootings at Marchan's home stemmed from a domestic dispute between the officer and the children's mother.

They said Marchan had been with the department about four years.
No comments: