A Jackson man has filed a federal lawsuit against the city and several of its police officers alleging he was assaulted, battered and arrested without cause as he openly and legally carried a pistol at the Jackson Secretary of State Office.

The officers violated Jeremiah Chesney’s constitutional rights under the First, Second and 14th amendments, according to the lawsuit, filed March 13 in U.S. District Court in Detroit. They showed “intentional, outrageous and reckless disregard” for his rights, falsely imprisoned him and seized his pistol without justification or provocation, the lawsuit states.

It asks for a $300,000 judgment against the city and the officers and $600,000 for “punitive or exemplary damages,” costs, interest, attorney’s fees and any other relief.

“He’s gone through a ton of distress and harm,” Chesney’s attorney, Steven Dulan, said Thursday when reached at his office in East Lansing.

“And he wants to make sure it doesn’t happen again.”

Jackson police Deputy Chief John Holda, the department’s public information officer, said he could not comment on the Chesney case because of the lawsuit. He deferred to the city attorney’s office. Interim City Attorney Bethany Smith said it is not the office’s policy to comment on pending litigation.

Chesney was openly carrying a pistol "on his person in plain view" about 5 p.m. May 15 at the Secretary of State Office in Jackson Crossing mall. He was doing so for both personal protection and to increase awareness that this is lawful in Michigan. The state office is not a “gun-free zone,” and Chesney has a valid concealed pistol license, which requires firearm training and a lack of criminal history, according to the lawsuit.

Officers forcibly removed him from the office, cuffed his hands and put him in the back of a squad car with a police dog.

Officer Timothy Black confiscated his weapon, which still is being held by the police department, according to the lawsuit.

Chesney spent two days in the Jackson County jail before he was arraigned May 17 on charges of resisting or obstructing officers and carrying a firearm in the commission of a felony.

The charges were dismissed in September, court records show. The “interests of justice” were the cited reason, the lawsuit states.

Chesney did nothing wrong, Dulan said. “He was literally just in possession of his gun at this time.”

The involved officers overreacted, he said. “They pulled his hair, treated him quite roughly.”

Dulan said cameras from the Secretary of State Office and a police vehicle or police vehicles captured the incident on video and the video showed Chesney did not resist.

An effort Friday to reach Chesney was not successful.

As a result of the officers’ actions, Chesney suffered physical and emotional injury, loss of freedom and loss of other constitutionally protected rights, the lawsuit states. He was humiliated, mortified and embarrassed.

The lawsuit further alleges the police department has not properly trained its officers in Michigan firearms law. City police have repeated violated the constitutional rights of people like Chesney, the suit states.

It seems there is a lack of training in cities all around Michigan, said Dulan, who sits on the board of the Michigan Coalition for Responsible Gun Owners, does legal instruction for concealed pistol licensees and teaches firearms issues at Thomas M. Cooley Law School. “Street officers either don’t know the law or don’t care what the law is,” he said.

Dulan also is representing a Grand Rapids man in a similar, pending case filed in December in U.S. District Court in Grand Rapids. Johann Deffert was walking March 3, 2013, on a public sidewalk, openly carrying a holstered pistol, when an officer approached. He drew his service pistol and aimed it at Deffert, according to the lawsuit. He ordered Deffert to the ground, handcuffed him behind his back and removed the gun from the holster. The Grand Rapids Press obtained a video of the confrontation.

“The stop, pat-down search and brief detention of plaintiff were supported by reasonable suspicion and/or other legal cause,” assistant city attorneys wrote in a response to the lawsuit.
No comments:

A 22-year-old off-duty police officer was arrested early Saturday on charges of driving while intoxicated, according to police.

Liam Donahue was arrested just after 6 a.m. in Queens, when he crashed his vehicle into an empty parked car around the intersection of 40th Avenue and 218th Street, police said.

Donahue refused to take a breathalyzer test offered to him by members of the NYPD who questioned him at the scene, the NY Daily News reported.

He was taken to North Shore University Hospital in Manhasset for further evaluation, according to the NYPD.

Donahue had joined the force in July 2013, and had been working as part of the Patrol Borough Manhattan North since, the paper wrote.
2 comments: 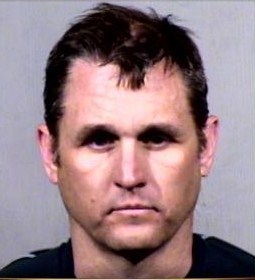 A Chandler officer is behind bars on felony charges after he was arrested for a domestic violence incident at his home.

Pennell's live-in girlfriend tell Chandler Police that on Wednesday he held her down on the couch and tried to strangle her.  According to a police report from Chandler Police, Pennell then called the victim's mother in Vermont and claimed he was going to kill his girlfriend.

His girfriend called Chandler Police on Thursday morning when he returned to the house.  The victim received medical attention, and a forensic nurse confirmed there were marks on the woman's neck consistent with strangulation.  Pennell surrendered to police at 6 p.m. Thursday.