New details are emerging in the case of a Crafton police officer accused of hitting and killing a pedestrian near Station Square and then fleeing the scene.

Donnie Breeden, 38, is charged with the July 2007 death of David Hall on West Carson Street, in Pittsburgh.

Hall, 24, was struck in the 1500 block of West Carson Street after stopping to talk to a bus driver, according to Pittsburgh police.

"Clearly, when there's allegations that a police officer is involved, he's violated the crimes code, that's cause for sadness in the law enforcement community. It's a tragic situation," said assistant district attorney Mark Tranquilli.

According to the criminal complaint, a witness told police that on the night of the hit-and-run, Breeden was with a group of friends at a restaurant when they decided to go to the South Side.

The witness told police that Breeden drove separately from the rest of the group.

Investigators said the witness told them that one of the people in the group got a call from Breeden saying he had hit a person with his vehicle on West Carson Street.

The witness went on to say that when the rest of the group arrived at the accident scene, they saw a Port Authority bus and several other vehicles, including Breeden's, stopped in the road near the victim.

A few days after the incident, the witness told police he went to Breeden's house to fix the damage to the SUV involved in the crash. The witness also said Breeden is still driving the same vehicle.

Breeden had been with the Crafton police force since 1994. He was released from the Allegheny County Jail on bail and faces two charges of involuntary manslaughter and accidents involving death.

At a hearing on Friday, Breeden's case was waived to trial. His next court date is Aug. 17.

Slideshow - Photos From The Case

A former South Carolina police officer who authorities say kidnapped and held his estranged wife and infant son hostage in Georgia says he intends to enter an insanity plea.

An attorney for David Dietz said in court documents filed this week he intends to introduce evidence that his client was suffering from a mental disease or defect at the time of his alleged crimes.

Dietz has pleaded not guilty to several federal charges in South Carolina, including kidnapping and carjacking. The results of his mental evaluation have been sealed.

The attorney for a former Baltimore police officer who was sentenced to 10 years in prison for taking nearly $380,000 from a Howard County bank in December 2007 asked a three-judge panel in Circuit Court on Thursday to have his jail term cut in half.

Debra Saltz said that her client, Robert Flanagan of Dallastown, Pa., was "extremely desperate" and still suffering from the effects of the illness that forced him to leave a nine-year law enforcement career when he took the money from a Bank of America branch.

Calling the sentence imposed by Judge Richard S. Bernhardt excessive to the point of cruel and unusual punishment, Saltz said at one point during the hearing, "In my mind, he would have been better getting drunk, driving down the road and killing someone. He would only get 18 months."

Judge Lenore R. Gelfman immediately disagreed, saying that someone guilty of vehicular homicide while under the influence of alcohol could receive up to 15 years.

Flanagan, then 38, had worked for a year as a guard for Dunbar Armored Security after leaving the Baltimore police force because of post traumatic stress disorder. Assistant State's attorney Lynn Marshall said that Flanagan was dismissed from Dunbar because of discrepancies in the money he collected and what he turned in.

Dressed in his old uniform but lacking proper credentials, Flanagan persuaded an employee at the Bank of America branch on Baltimore National Pike to turn over $379,000 in cash. Flanagan and his wife, Robin, were arrested later that day. About $200,000 has never been recovered.

The employee who gave Flanagan the money as well as the branch manager were later fired, which Judge Bernhardt later cited as one of the reasons for the 10-year sentence. Since it was a first offense, Flanagan could have received as little as six months of probation.

Charges against Robin Flanagan were later dropped when she cooperated with police.

"We don't know what happened to that money, and we'll never know," Saltz said.

But Marshall contends that Flanagan still knows where the money can be found.

"He stashed that money somewhere," Marshall said. "He will do jail time so he can have a nice nest egg when he gets out."

Flanagan, who is being jailed in Cumberland and is receiving treatment for PTSD, according to his lawyer, declined to speak on his own behalf.

At the time of his arrest, Flanagan was out on bond after being arrested in Baltimore County on a similar charge. Flanagan pleaded guilty to taking $70,000 from a Target store in Towson while dressed as an armored guard, and was given five years in jail to run concurrent with his sentence in Howard County.

Saltz said that he should have been given the same length term in Howard County, but Marshall argued that the Baltimore County judge who sentenced Flanagan was aware of his 10-year sentence in Howard County.

Gelfman, along with Judge Louis A. Becker and Judge Diane O. Leasure, will make their decision later.
No comments:

Email ThisBlogThis!Share to TwitterShare to FacebookShare to Pinterest
Labels: arrested for theft, Maryland

A former Hillsborough Sheriff's corporal was arrested by U.S. Marshals Thursday on two counts of attempting to access child pornography with a computer and one count of possession of child pornography.

Thompson was indicted in U.S. District Court on Wednesday, and booked into the Pinellas County Jail on Thursday.

The indictment says that in October 2008 Thompson knowingly tried to see a minor involved in "sexually explicit conduct" on his computer in Thonotosassa, and in November he had some shipped to him. Officials confiscated his Dell computer and external hard drive.
No comments:

Taser Death of Jarrel Gray Will Go to Court

A federal judge ruled today that the wrongful death case against Frederick County, its sheriff's office and one of its deputies for the use of a Taser is going to trial.

The family of the 20-year-old Frederick man is seeking $145 million in damages.

"The family is elated that they will have their day in court," said Ted Williams, one of the lawyers representing Gray's parents.

A pretrial conference is set for September, at which time U.S. District Court Judge William Quarles will set court dates.

Williams anticipates the trial to get under way in early 2010.
No comments:

Email ThisBlogThis!Share to TwitterShare to FacebookShare to Pinterest
Labels: death from taser, Maryland

Vernon police said they were called at 2:33 a.m. to an apartment on South Street on a report of a domestic violence assault. The woman they met told them that she and Sullivan had been in an argument that escalated into an assault. She told officers that Sullivan held her down and threatened her.

The woman told police that she asked Sullivan to leave several times. He finally did, and she locked the door behind him, she told police. Sullivan then broke the door open and assaulted her again, police said.

Police found Sullivan at his apartment and took him into custody. His bail was set at $250,000.

Hartford Assistant Police Chief Neil Dryfe said Friday afternoon that Sullivan, according to department policy, has been suspended from his duties without pay. Sullivan has been a Hartford police officer for seven years.
No comments: 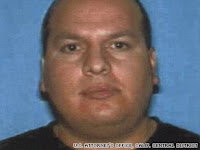 Federal prosecutors charged Feliciano Sanchez with deprivation of rights under color of law.

Feliciano Sanchez, 34, admitted in court Thursday that while on duty on May 16, 2007, he pulled over a female driver in a traffic stop and forced her to perform oral sex on him, according to a news release from U.S. Attorney Thomas O'Brien, who heads the office for the Central District.

After learning the woman, identified as R.H. in court documents, did not have a driver's license with her, Sanchez told her he suspected her of drinking and her car would be towed, Mrozek said.

Sanchez offered to drive R.H. to her job, but instead drove her to the parking lot of an auto repair outlet in Bell, Mrozek said.

Sanchez placed his hand on his gun and forced her to perform sex on him in his patrol car, Mrozek said. Afterward, Sanchez drove R.H. to her work place, Mrozek said.

"Officer Sanchez brutalized a person he had sworn to serve," O'Brien said in the release. "As a result of his criminal conduct, Mr. Sanchez now faces a substantial amount of time in federal prison. His conduct eroded public confidence in law enforcement and cast a pall over his former colleagues who obey the law, proudly working to preserve public safety."

Federal prosecutors charged Sanchez with a civil rights violation, according to the release.

The crime carries a maximum penalty of 10 years in prison upon sentencing. Sanchez has been held without bond since his arrest in May 2007, Mrozek said. Sanchez's sentencing is scheduled for November 18.

Sanchez resigned as an officer after his indictment, Bell Police Department Capt. Anthony Miranda said. Miranda said Sanchez's case was a first for the department.
__________________________
Previous Post: http://whathappenedtoprotectandserve.blogspot.com/2008/06/former-bell-police-officer-arrested-on.html
No comments:

Email ThisBlogThis!Share to TwitterShare to FacebookShare to Pinterest
Labels: California, deprivation of civil rights under color of law, sexual assault
Newer Posts Older Posts Home
Subscribe to: Posts (Atom)
All person charged on this site with a crime are presumed innocent until proven guilty.