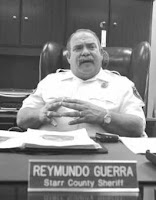 The 52-year-old sheriff, also known as "Tio," is a defendant in an indictment returned under seal by a federal grand jury earlier this month.

The 19-count indictment alleges Guerra and 14 others were part of a conspiracy to move hundreds of pounds of marijuana and cocaine through the remote Mexican border county.

Guerra is charged with three counts, including conspiracy, acting as an accessory by suggesting a co-defendant use fake lease documents to avoid apprehension, and using a telephone in the conspiracy.

The burly, mustachioed sheriff told U.S. Magistrate Judge Dorina Ramos he understood the charges at an initial appearance Tuesday. Ramos ordered him to remain in custody pending an arraignment Friday.

His attorney, Philip Hilder of Houston, said he was innocent.

"We will answer the charges in a court of law," Hilder said.

If convicted, Guerra will join a list of Texas border officials to go down for drug trafficking or corruption.

Among them, Eugenio "Gene" Falcon, a predecessor in the Starr County sheriff's office, went to prison in 1998 for taking kickbacks from a bail bondsman.

Former Cameron County Sheriff Conrado Cantu is serving more than 26 years for using his badge to extort money from drug dealers and other criminals.

"We are hopeful that this type of investigation will prove to be a deterrent to those who are considering engaging in violations of the law while enjoying the public's trust," FBI Special Agent Ralph Diaz said Tuesday. 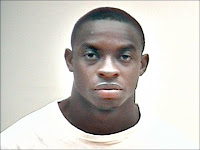 A second suspect was arrested Friday in a Jeffersonville rape case.
Adonis Walker, who is a community corrections officer in Clark County, appeared in Clark County Circuit Court on Monday afternoon on allegations of rape. At the hearing, the prosecutor’s office asked for a 72-hour continuance before filing charges.

Colastin was charged Sept. 26 with rape, a class B felony, and criminal confinement, a class D felony.

Deputy Prosecutor Dawn Elston said she did not know if Walker would be charged with class A or B felony rape.

According to a probable-cause affidavit in Colastin’s case, Colastin and Walker offered to take the two women and another man home from the popular downtown nightspot. Instead, the two took them to the 800 block of East Chestnut Street in Jeffersonville, the document states.

The male — who was in the vehicle — told police that several men exited the apartment. He said one of the suspects grabbed one victim and took her in the house while another pushed the other victim back into the car. He said that when he realized they were in danger, he ran to the 600 block of East Court Avenue and called 911.

Officers found the two girls in an apartment along the 2000 block of Paddlewheel Drive. Police said they found Colastin hiding in the closet. Colastin denied having sex with either girl.

Walker initially said he may have had sex with one of the girls. Later, he reportedly confessed to assaulting one girl and having sex with another who was sleeping, according to the affidavit in the Colastin case.

Both girls told detectives that they were very intoxicated and could not remember having sex with anyone. A forensic nurse determined that both girls had intercourse and both had injuries consistent with forced sex.

Walker’s bond was initially set at $50,000 cash only. Circuit Court Judge Abe Navarro gave the prosecution until 1:30 p.m. Wednesday in Circuit Court to file charges. At that time, the issue of bond will be revisited, Navarro said. Walker was not represented by an attorney in court.

Colastin is still being held without bond in the Michael L. Becher Adult Corrections Complex. His first pretrial conference is scheduled for Nov. 24, with jury trial set to begin Feb. 10.
No comments:

Email ThisBlogThis!Share to TwitterShare to FacebookShare to Pinterest
Labels: rape

No criminal charges have been filed against either of the officers.

The 47-year-old officer, who is not being identified because he has not been arrested or charged, had been with the department for seven years.

The officer was assigned to patrol, and he did not have any contact with children as part of his regular duties, Grapevine police Sgt. Kim Smith said Monday.

Roanoke police began an investigation July 22 after getting the report from the girl.

"The report was that a juvenile had been furnished alcohol and she had been touched," Roanoke police Sgt. Chris Almonrode said Monday.

As of Monday, there was one juvenile accuser and several juvenile witnesses, Almonrode said.

The former officer faces charges of indecency with a child by sexual contact and providing alcohol to minors, Almonrode said Monday.

The veteran officer was placed on administrative leave with pay July 23 after Roanoke police contacted Grapevine police officials about the criminal investigation.

Grapevine police began an internal investigation Aug. 11, and he resigned Aug. 15, noting that he was leaving because of the allegations, authorities said Monday.

"The allegations against him is not a representation of this department," Smith said. "We want to be known as a professional department."

On July 12, officer Gus Barrera, 30, was dispatched to a report of shoplifting at Grapevine Mills mall.

According to Grapevine police reports, store employees called the parents of a 16-year-old girl.

The father was so upset with his daughter that he struck her with his hands and threatened her with a pipe, the report states.

When he arrived, Barrera found that the 16-year-old and her parents had left, but employees told him about the assault and voiced concern over the incident.

Grapevine police did not learn about the assault until store employees contacted authorities a few days later.

Barrera is accused of failing to make a family violence report on the incident.

Police arrested Sung Shik Choi, 43, of Fort Worth on Aug. 11 on suspicion of aggravated assault. He posted $50,000 bail Aug. 13 and remained free Monday.

Barrera, a seven-year veteran, was placed on administrative leave with pay Aug. 13.

Barrera remained on leave as of Monday.
No comments: