A peace officer spent the weekend on the wrong side of jail bars after being accused of stealing a woman's Social Security money. Rick Nichols, 46, was booked into the Utah County jail on Friday on suspicion of felony theft. The jail released him Monday morning after Nichols posted bond.

Nichols is a corrections sergeant at the Utah State Prison. Department of Corrections spokeswoman Angie Welling said Nichols was not allowed to resume work, but no decision has been made about his permanent status. Saratoga Springs Police Cpl. Aaron Rosen said a woman on June 2 reported losing a day planner that carried $1,100 cash. The Social Security Administration provided the money and the woman planned to pay for a surgery with it, Rosen said.

The planner was found in a post office box in Lehi. The money was missing, Rosen said. Police reviewed a surveillance recording from a Smith's market in Saratoga Springs. Rosen said the video showed the woman placing her planner on a display stand.

Nichols, wearing his prison uniform, took the planner from the stand and walked out of the store, Rosen said. Police identified Nichols when last Friday he called police to report finding the planner and the money, Rosen said.

Rosen said police believe Nichols called because he learned he was a suspect. Nichols could not be reached for comment on Monday.
No comments:

Email ThisBlogThis!Share to TwitterShare to FacebookShare to Pinterest
Labels: arrested for theft, Utah

Officer Accused Of Raping A Woman 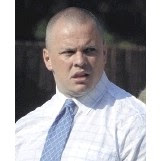 
A POLICE OFFICER accused of raping a woman on four occasions was a "typical bully" who mentally and physically abused his victim, a court has heard.

Devon and Cornwall police constable Jamie Gilbert, aged 34, of Birkdale Close, Saltash, has pleaded not guilty to four charges of rape. The alleged victim cannot be named for legal reasons.

The trial, which is expected to last two weeks, started yesterday at Exeter Crown Court, when a jury was sworn in and the prosecution made its opening statement.

Gilbert, who was a serving police officer based at Callington Police Station at the time of the alleged offences, was suspended from duty in June 2007, when the allegations were first made to police.

Sarah Munroe QC, prosecuting, outlined the case against Gilbert and the details of each of the four alleged rapes.

As background, she told the jury that Gilbert was a keen bodybuilder who took anabolic steroids in order to build his muscles and at the time of the alleged rapes he weighed between 17 and 18 stone, although he was only 5ft 8in tall. Miss Munroe also told the court that Gilbert liked watching pornographic films.

The third and fourth alleged rapes happened on two separate occasions, on January 14 and January 26 in 2006, the court heard.

Miss Munroe said evidence from an independent witness would show that Gilbert had shown signs of behaving like a "typical bully" who was aggressive. The jury also heard that the alleged victim had had consensual sex with Gilbert on other occasions.

The prosecution said the victim found the courage to make the allegations to police in June 2007, after seeking help from a counsellor, and that when Gilbert was first interviewed by police, he denied all the charges, saying the victim had consented to sex on each occasion.

Miss Munroe urged the jury to try the case on the evidence put before them and to avoid being swayed by "emotion on either side".

The jury was to hear evidence from the alleged victim today.

The trial continues.
No comments:

Email ThisBlogThis!Share to TwitterShare to FacebookShare to Pinterest
Labels: rape, rapist
Newer Posts Older Posts Home
Subscribe to: Posts (Atom)
All person charged on this site with a crime are presumed innocent until proven guilty.