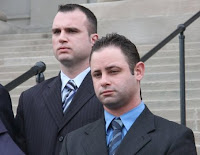 The officers, Thomas Elliassen and Richard Danese, both 29, were indicted last March on 33 criminal counts, including 13 felonies, but reached a deal with prosecutors after the boy, Rayshawn Moreno of Staten Island, now 15, refused to testify in court, according to prosecutors.

The officers were sentenced in State Supreme Court on Staten Island to conditional discharge for one year, said Daniel M. Donovan Jr., the Staten Island district attorney, and will serve no time in jail. But the officers have been assigned to modified duty and are facing departmental charges, a police official said.

Officers Elliassen and Danese, who both live on Staten Island, were arrested on Nov. 2, 2007, and charged with unlawful imprisonment and endangering the welfare of a minor.

Prosecutors said the officers came across Rayshawn on a street corner on Halloween night a few days earlier, and, believing that he had been throwing eggs at passing cars, stopped the boy and placed him in their patrol car. He was driven to an isolated marshy area, where he was pulled from the police car and told to strip to his underwear and lie face down in the roadway, prosecutors said. The officers then kicked and struck him and abandoned him there, prosecutors said.

Lawyers for Rayshawn and his family had said the officers, who are white, had used a racial epithet while threatening the teenager, who is black.

Mr. Strazzullo said the officers arrested Rayshawn but changed their minds about taking him to the police station, and decided to take him home instead. But when they asked his name, age and address, he refused to tell them, Mr. Strazzullo said. He said that as soon as they let the boy out of the car he took off running.

“At the end of the day, the officers did Mr. Moreno a favor,” Mr. Strazzullo said.

In a related case, Officer Danese was charged in Brooklyn with unauthorized use of computerized police records in what was described as an attempt to find negative information about Rayshawn and his father.

Mr. Donovan said in a statement on Wednesday that Rayshawn’s story was credible.

“The victim’s account of the events leading to this prosecution remained consistent,” Mr. Donovan said. But as prosecutors began to prepare for trial, Rayshawn began refusing to cooperate, he said.

“While we were prepared to go forward, we believe we could not adequately present our case without the full cooperation of our victim,” Mr. Donovan said.

Other Information: http://www.silive.com/news/index.ssf/2009/01/das_statement_on_plea_deal_off.html
No comments:

Sgt. Michael Hanson Investigated for Not Living in City Where he Works

A Boston police sergeant has been placed on administrative leave and could be fired in allegedly violating a residency regulation that requires employees of the city to live within its boundaries, officials said yesterday.

Sergeant Michael Hanson, 38, was placed on leave following an investigation by the city's compliancy unit, which responds to tips about employees who violate the rule.

Hanson, a veteran of 10 years who is assigned to the district covering West Roxbury, could not be reached for comment yesterday. The head of his union, the Boston Police Superior Officers Federation, said the organization stands behind him.

"Sergeant Hanson has the full backing and support of the Superior Officers Federation," said Joseph Gillespie, the union president. "We feel this is in response to our ongoing contractual negotiations."

The union has been without a contract since 2006. The department's two other unions, the Boston Police Patrolmen's Association and the Detective Benevolent Society, negotiated contracts in 2006 that allow members who have been with the department for 10 years to live outside the city. Other unions have negotiated similar exceptions to the 1976 ordinance. Fewer than 10,000 of the city's roughly 18,000 employees are subject to the regulation, said John McGonagle, chairman of the city's residency commission, which hears complaints.

The compliancy unit is also investigating at least two firefighters accused of violating the residency rule, officials said. Their names were not released because of the ongoing probe.

In January, a police civilian - Keri Mastrogiacomo, who was assigned to the ballistics unit - left the department after the compliancy unit accused her of violating the rule. She resigned before her residency hearing at City Hall, police said.

Mastrogiacomo, who acknowledged she was living in Braintree, said she and her husband own a home in Boston and pay taxes on it.

She said the investigation into her residency occurred about a month after she complained that a supervisor had sexually harassed her and discriminated against her.

Mastrogiacomo said she has filed a complaint with the Massachusetts Commission Against Discrimination. A police spokeswoman declined to comment.

"The residency rule isn't worth the paper that it's written on," Mastrogiacomo said in a telephone interview. "It's enforced only when it suits them."

The compliancy unit falls under the city's Property and Construction Management department and has one full-time investigator. The department may contract with a private company for more investigators if there is a backlog of cases, McGonagle said.

The unit is investigating about a dozen cases, he said.

After receiving a tip, investigators typically follow employees home to verify whether they live at the address they say is theirs, McGonagle said. They also examine documents like voting records, insurance forms, and registrations, he said.

The residency commission then holds a hearing during which both sides present their cases, said McGonagle, who noted that he has heard about 150 cases since 1994, when the city, under Mayor Thomas M. Menino, began enforcing the ordinance more aggressively.

Of those cases, about 50 have resulted in the employee being fired or resigning, McGonagle said.

"The city wants to have some stability and some control over its workforce and would like to know that the people who are good enough to work for the city would also want to live in the city," he said.
No comments: