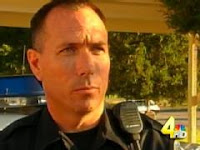 A Metro police officer has quit after 17 years following allegations that he had an inappropriate sexual relationship with a child.

Officer James Stackhouse joined the Metro Police Department in September 1992. He was a field training officer with the Hermitage precinct until last Tuesday, but his career as a police officer began to unravel Sunday night.

"In the early morning of Aug. 3, Officer Stackhouse was called in and was presented with the allegations and was questioned or talked to about the allegations," said Metro police spokesman Don Aaron. "They were very serious, and a situation like this warranted his immediate decommissioning and the admonishment that disciplinary action would begin immediately."

Sources told Channel 4 News the child involved is a 12-year-old girl who lives in Wilson County but that the Clay County Sheriff's Office is handling the investigation since the alleged incident happened on Dale Hollow Lake.

Metro police said they informed Stackhouse of the allegations on Monday morning and that he submitted a one-sentence, handwritten resignation Tuesday.

"He did not work in between the third and the fourth," Aaron said. "He was decommissioned or had no police power from the point that he was informed of the allegations."

Stackhouse's personnel file shows a number of commendations and that he won Officer of the Month in 2006, 2008 and 2009.

He has been disciplined twice, according to the documents, including a three-day suspension in 2006 for contacting a known felon that he met on duty to pursue a personal relationship.

No charges have been filed based on the investigation against Stackhouse.

Sources said the facts of the investigation will likely be sent to the grand jury.

Video: Officer Resigns After Alleged Relationship With Child
No comments:

Matthew Dougil is charged with two felony counts of perjury and one misdemeanor count of making a false or misleading statement to a public servant. He has pleaded not guilty and is on unpaid leave from his job until the criminal case against him is resolved.

Prosecutors allege the 11-year veteran of the Gig Harbor force lied in police reports he filed as part of a drug investigation that resulted in two people being convicted. The convictions since have been vacated, and the city paid $45,000 in damages to a third man who was ordered to attend drug court as part of the case.

Investigators contend in court documents that, among other things, Dougil wrote in an official report that police searched a confidential informant who was used to buy drugs from the men when in fact the informant was not searched before the transaction.

The supervisor of the prosecuting attorney’s office drug unit later told colleagues he would not have prosecuted the men had he known Dougil was alleged to have lied on the reports, according to documents filed in the case.

Dougil’s attorney, Brett Purtzer, has said his client is innocent and intends to present a vigorous defense.

Testimony before Superior Court Judge Rosanne Buckner is expected to last about a week.
No comments:

Authorities say a Martinsburg police lieutenant charged with battery apparently was upset about inappropriate online messages another man allegedly sent to his wife.

John Sherman is accused of striking Larry "Tike" Murphy Thursday night while Murphy was attending his daughter's cheerleading practice at the Martinsburg Church of Christ.

Murphy told police that the 45-year-old Sherman screamed profanities at him and accused him of sending inappropriate messages to Sherman's wife via the social networking sites MySpace and Facebook.

Sherman is on administrative leave with pay.

His attorney, Harley Wagner, urged the public to reserve judgment against the 19-year veteran.
No comments:

An Escambia County Sheriff’s Office deputy has been arrested after he allegedly pointed a gun at two people in Pensacola.

Deputy Joseph Dejoie, a 15 year veteran with the Escambia Sheriff’s Office was involved in a incident within the city limits of Pensacola last Monday, according to a press release from the sheriff’s office.

“After an investigation conducted by the Pensacola Police Department, a warrant was issued and served on Deputy Dejoie today, charging him with two counts of aggravated assault,” Ted Roy, spokesperson for the ECSO, said Tuesday afternoon. Bond was set at $500.

“The investigation determined Dejoie could not adequately justify to the satisfaction of the detective and the State Attorney’s Office his actions in pointing the firearm,” said Pensacola Assistant Chief Chip W. Simmons.

The incident began around 3:15 p.m. August 3 in the 800 block of Scenic Highway after Dejoie, who was driving an Infiniti G35, stopped suddenly in the middle of the road, causing the driver of a Jeep Cherokee to slam on its brakes, according to Pensacola Police.

The driver of the other vehicle – Dylan Johnson, 21, of Pensacola – honked his horn at Dejoie. This resulted in an exchange of profanities and insults between occupants of both vehicles, which continued westbound on Cervantes Street, according to police reports. Dejoie is accused of pointing a handgun at Johnson and a 15-year-old male passenger in his vehicle on East Cervantes Street and the Bayou Texar Bridge.

The victims told police they turned north on 19th Avenue to escape, and called 911 to report the incident. Dejoie also called 911 at about the same time.

Deputy Dejoie is currently on paid administrative leave pending the outcome of the case, according to Roy.
1 comment:

A former head of the Florida Sheriffs’ Association has been sentenced to nearly six years in federal prison in a money laundering and corruption case.

Ex-sheriff Charlie Morris apologized to his north Florida county and former employees before he was sentenced Tuesday to 71 months. The sentence was near the maximum allowed. U.S. District Judge Lacey Collier told Morris he had abused his office and betrayed the public’s trust.

The government traced the money back to a scheme in which Morris and Adams deposited bonus checks in employees’ accounts and asked the workers to return a portion of the money in cash.
No comments:

A 41-year-old former Seguin Police Department officer has been indicted on charges of indecency with a child.

District Attorney Heather Hollub said grand jurors handed up a three-count indictment of Byron Shane Burkhart for the alleged indecency with a child under age 17 by sexual contact.

If proved at trial, the allegation is a second-degree felony punishable by two to 20 years in state prison and a fine of up to $10,000. Since Burkhart has no prior criminal offenses, he could also get probation.

“It’s always troubling when those we entrust with protecting us commit criminal offenses,” Hollub said. “My office will prosecute this case to the fullest extent of the law.”

The Seguin Police Department brought the allegations against Burkhart forward after being informed by school officials and members of an outside law enforcement agency of an alleged inappropriate relationship between Burkhart and the girl believed to have taken place back in February.

Police officials asked for independent investigations by the Texas Rangers and by Hollub’s investigator, Frank Allenger. Burkhart is one of two Seguin police officers who came under a cloud of sexual suspicion last spring in separate, unrelated incidents. He resigned his position in late May.

The second officer, who quit his job in June after being placed on administrative leave pending the outcome of an investigation into an allegation involving an adult woman, has not been charged with a criminal offense.

Kelso informed Burkhart of the allegations in a May 29 letter telling the officer he was contemplating firing him. That letter was released by the city of Seguin in response to a request filed by the Seguin Gazette Enterprise under the Texas Public Information Act.

“I am considering termination of your employment for conduct unbecoming an officer of the Seguin Police Department,” Kelso wrote. “Specifically, it is alleged by two local educators that you have engaged in an improper relationship with a minor child and that you are responsible for inappropriate communications (text messages) with that child.”

Kelso informed Burkhart of his expected behavior as a city employee.

“You are a public servant and as such, you are held to the highest standard of ethical conduct,” Kelso said. “Consistent with that level of public trust, the behavior alleged certainly would not be considered to be in the best interest of the City of Seguin and therefore would subject you to discipline up to and including termination.”

The indicted charges suggest there was more involved in the relationship than texts or e-mails.

Under section 21.11 of the Texas Penal Code, Indecency with a child by sexual contact is defined as, “ ... any touching by a person, including touching through clothing, of the anus, breast or any part of the genitals of a child ... .”

Kelso and city officials declined to discuss the allegations against Burkhart on Monday.

The important thing, Kelso said, is that the community not regard allegations against one officer as a reflection on the behavior of the rest of the 65 members of the SPD. As soon as the allegations were made, they were investigated at the behest of the police department, with its cooperation, Kelso said.

“We’ve been proactive in this situation. Any time an allegation is made against any police officer it will be investigated and action will be taken that is appropriate to the outcome of that investigation. The department should be judged by the way the allegation or incident is handled as opposed to the improprieties of an employee. It is difficult to monitor every moment of each officer both on and off duty, but we expect them to abide by the rules governing their employment.”

Burkhart was an eight-year veteran of the SPD. No pre-trial hearing dates had been set Monday.

The Seguin Police Department has cooperated openly and completely in the investigations, Hollub said.
No comments:

Email ThisBlogThis!Share to TwitterShare to FacebookShare to Pinterest
Labels: indecent liberties with minor, sexual abuse, Texas
Newer Posts Older Posts Home
Subscribe to: Posts (Atom)
All person charged on this site with a crime are presumed innocent until proven guilty.