Lawrence Epps, 46, of Jackson, Mississippi was arrested Thursday for holding up a downtown credit union and taking just $8,000 last week.

Jackson Police Department had obtained an arrest warrant for Epps on April 25 just a few hours after the Mississippi Employees Credit Union on South West Street was robbed. Witnesses told police the robber walked into the bank, handed the teller a note demanding money and fled with $8,000. It was the fifth reported bank robbery in the metro area in a month.

Epps of Jackson eluded capture for a week while staying in the metro area, authorities said.

"There are places where you can go and disappear, and people help you probably," Assistant Police Chief Lee Vance said. "It just took us about a week to find out exactly where he was.”

Vance said JPD is not looking for anyone who may have harbored or assisted Epps.
"But if it turns out that that was the case, then we will actively pursue those individuals, as well," he said.

Scott would not comment on whether investigators went to Epps' home during their search for him or whether the money has been recovered.

Neither marshals nor JPD investigators said that they knew why Epps was downtown, but they said they believe Epps may have been flushed out of hiding by the attention he was getting.

"I do know that the Police Department, the FBI and the Marshals Task Force have placed a lot of pressure on Mr. Epps and some of his associates," Griffin said. "And that possibly could have led to him seeking assistance somewhere else."

Epps was a six-year burglary detective and former president of the police officers union before being fired in 1999 after he tested positive for cocaine use. In a Civil Service Commission hearing in November 1999, Epps denied smoking crack in the presence of then-Internal Affairs Detective Deric Hearn. Epps' termination from JPD was upheld by the commission, and a Hinds County Circuit Court judge denied Epps' appeal in 2001.

"It is always a slap in the face to those of us in law enforcement to see one of our own go bad," Flowers said.

"It is a testament to the scourge of crack cocaine in our society. It is very sad," Vance said. "Police officers are held to a higher standard and higher expectations, and he betrayed that. Even more than that, he betrayed himself and his family."

He is being held at the Madison County jail on a $150,000 bond. If convicted he could face up to 20 years in prison.
No comments: 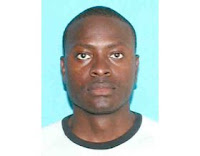 Officer Craigburke Bunknor is accused of using a department gasoline card for his own personal use. According to the records he used a gas card that was assigned to the schools resource officer, and another officer’s PIN number to put $400 worth of gas into his personal vehicles and charged it to the city. Officer Buchnor did this on 10 different occasions, and was recorded on security camera twice.

Minden Police Chief T.C. Bloxom said he noticed a discrepancy in the fuel usage for Bunknor fuel card when he was reviewing the departments expenses for the month.

Officer Bucknor was arrested by detectives when he arrived for duty at the police department at 10 p.m. He was booked into Bayou Dorcheat Correctional Center on a charge of felony theft.

Bucknor has been suspended without pay.

Guess the gas prices are getting a little to high for everyone. Almost don't blame him.
No comments: