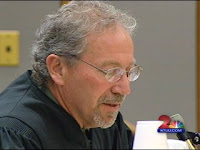 An Anchorage superior court judge has been arrested for driving under the influence.

Police say Judge Patrick McKay was pulled over on the Glenn Highway for a traffic stop Thursday around 9 p.m., and the officer found him to be under the influence.

He was released on a $500 bail and is scheduled to appear in court on Oct. 14.
No comments:

A Dallas area police officer and three dispatchers have been fired over the egging of the house of a resident known to file complaints.

James said the terminations happened following an internal investigation of the off-duty incident.

No charges were immediately filed in the misdemeanor criminal mischief investigation.

The Carrollton home of Steven Benzer was pelted with eggs. Benzer said he believes a female neighbor, the target of some of his complaints, is friends with the officer.

No decision was immediately announced on whether the fired employees plan to appeal.
No comments:

Memphis Police say a tip during a routine traffic stop ended with Officer Lowell Duke being indicted on drug charges. Federal agents say Duke was part of a drug operation that worked the Lamar and Cherry area. Ten people including Duke are now facing charges.

Police would not give details about Duke's role in the operation, and would not say if other officers could be involved. Federal agents will say that the operation was sophisticated. Certain people worked security, others transported the drugs. Some were sellers and others were stashers.

Police say Duke has been under investigation for several months. During that time he was been off the streets on “desk duty.” Duke told Eyewitness News he would not comment on his arrest.

Police Director Larry Godwin says “There are good police officers out there. This is a guy that chose to go the wrong way.” Godwin admits this is a blemish on the department saying, “I know it doesn’t look good for the department, but on the other hand, we are taking care of our business.”

Email ThisBlogThis!Share to TwitterShare to FacebookShare to Pinterest
Labels: drug charges, Tennessee
Newer Posts Older Posts Home
Subscribe to: Posts (Atom)
All person charged on this site with a crime are presumed innocent until proven guilty.