A Chester County sheriff's deputy is accused of stealing $300 from the department's evidence room.

Deputy Rodney Killian was arrested today on a charge of misconduct in office, according to a news release from Chester County Sheriff Richard Smith. Killian's arrest came after a State Law Enforcement Division investigation, the release states. The release does not specify what prompted the investigation, other than that Sheriff Richard Smith was told “several things were not right at the sheriff's office” when he took over in January. Contacted this afternoon, Smith declined to elaborate, saying the investigation is ongoing.

“I have known Deputy Killian for approximately 15 years and this was a total shock to me and the men and women of Chester County's Sheriff's Office,” Smith said in the release. “It is reprehensible when a deputy violates the law that he is entrusted to uphold and I will not stand for it.”

The money was taken between Oct. 1, 2007, and Jan. 1 of this year, according to an arrest warrant. The warrant also says Killian disposed of the evidence log book to hide the crime.
No comments:

Keeping drunk drivers off the roads is one of the duties of a local police officer, who now finds himself accused of drinking and driving.

It started last sunday morning when a Geneva police officer clocked an SUV traveling at 63 miles an hour in a 35 zone, and reported that the driver went left of center and nearly hit his cruiser.

He says he smelled alcohol on the driver's breath and was surprised when the man identified himself as an off duty Conneaut police officer.

Jason Rivers, 34, a four year veteran of the Conneaut force, failed a number of field sobriety tests and was arrested.

A breathalyzer test would later reveal his blood alcohol content was .189, more than twice the legal limit.

Rivers has pleaded "not guilty" to the drunk driving charge.

Conneaut police have placed him on administrative leave. 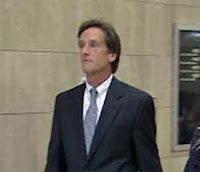 July 18, 2008 Judge Felts was arrested in Marion County for Operating a Motor Vehicle with an alcohol content of at least .15, which is a misdemeanor. He was also arrested for public intoxication, also a misdemeanor.

In August, Judge Felts plead guilty to the OWI charge and the state dropped the public intoxication charge. A judge sentenced Felts to one year in jail and suspended the sentence for the time served. Judge Felts was also ordered to serve one year probation, have his driver's license suspended for 90 days and attend alcohol treatment.

Judge Felts could have faced a suspension or even lost his seat on the bench.

New London's police chief says he has fired a sergeant arrested in January on sexual assault charges involving a boy.

The chief says William Edwards, who had been suspended without pay since his arrest, was notified in person late Monday afternoon.

Edwards is accused of sexually assaulting a boy who told authorities he had four or five encounters with the officer when he was between 5 and 7 years old.

The chief says that Edwards was brought up on charges of violating the department's rules and regulations, such as alleged drug use, untruthfulness and conduct unbecoming an officer.

Edwards is charged with third-degree sexual assault, unlawful restraint, tampering with a witness and two counts of risk of injury to a minor.

Prosecutors have moved his case to Windham County.

Information from: The Day, http://www.theday.com
No comments:

The Cottage Grove officer has not been arrested or charged with any crime in connection with the ongoing FBI investigation.

However, search warrant applications filed by FBI agent Christopher Luh state that investigators have probable cause to believe that the officer has violated federal child pornography laws.

The investigation began last September, when officials with the National Center for Missing and Exploited Children informed the FBI that someone with the user name “mywebboys” had posted child pornography on a Web site known as Photobucket, the applications state.

The applications include graphic descriptions of photos posted online from an Internet provider address registered to the officer. All of the photos depict nude, prepubescent boys, some of whom are performing sex acts, the documents state.

According to a separate warrant served at the officer’s north Eugene home, FBI agents seized five cameras, five computers and other items.

A woman has accused a former Penn State police officer of repeatedly threatening and assaulting her, and twice using his master key in February to get into her university office and leave her notes.

Joseph Garner resigned from his job in February around the same time he was suspended as a police officer for 15 days, Assistant Chief Tom Sowerby said Tuesday.

The woman also accuses Garner of threatening to kill her animals, and using his military and law enforcement training to physically restrain her, according to court papers.

She filed a protection from abuse order against Garner on Feb. 4, which makes it illegal for Garner to have contact with her.

In her request for the order, the woman wrote that Garner had strangled, punched, grabbed, slapped, bit and pinched her.

At one point, she said, she received up to 30 harassing calls and text messages from Garner in a half-hour period, court papers say.

Twice between Feb. 2 and 3, she alleged, Garner used his university master key issued to police officers to enter her office and leave notes for her, court papers say.

A hearing scheduled for Tuesday in front of President Judge David E. Grine was continued until next week.

State police Sgt. Jim Emigh at Rockview said an investigation of an officer with Penn State police was referred to him, but no criminal charges have been filed.

The protection order is a civil matter unless it is violated.

“We were asked to look into an incident involving a Penn State police officer for some of his conduct on duty to determine if it rose to the level of a criminal offense,” Emigh said.

“As of now, we are still conducting our investigations.”

As part of the protection order, Garner was required by Judge Pamela Ruest to surrender his weapons. The county Sheriff’s Office said that Garner relinquished his weapons to a third party — something the law permits if the defendant chooses not to have the sheriff hold the weapons.
No comments:

A Bronx cop on trial for manslaughter said he had no choice but to shoot an unarmed man.

Officer Raphael Lora spent three hours on the stand Wednesday. He's a veteran cop and ex-combat Marine, but now he's fighting to stay out of prison.

"It's a very frightening situation to have to take the stand in your own defense. He's been living with this for the last 18 months. I thought he was professional, calm. Shots was fired, and he did hit the cop with the vehicle," said Lora's attorney Stuart London.

Lora called 9-1-1 the night he killed Honduran immigrant Fermin Arzu. Arzu was drunk when he crashed his van outside Lora's home. The off-duty cop grabbed his gun and ran to the vehicle. Lora said Arzu was incoherent, then suddenly Arzu threw something in Lora's face and started driving away.

Lora said his arm was stuck in the door. "My main intention was to extract myself from the car and that's when I fired my weapon," he said.

There were five shots. One hit Arzu in the back, killing him.

Juana Arzu, the victim's sister, said "I feel sick now. Yeah, I feel bad, I don't like nothing." The Arzu family says the cop's story doesn't hang together.

For instance, there's nothing in the EMT report to support Lora's claim that his tooth was chipped when Arzu threw something at his face, and the cop has told different versions of firing, both in order to break free of the moving van, and breaking free then firing.

"Frankly rather than acting like a heroic officer to render aid, he acted with a chicken heart," said Arzu family attorney Michael Hardy.

Lora decided against a jury trial, so a judge will decide if this shooting was justified, or a case of manslaughter.
__________