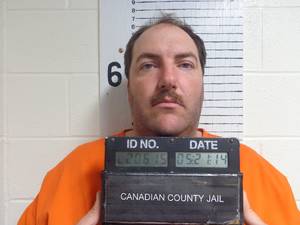 Robby A. Smith, 33, of Minco, was arrested on complaints of larceny of implements of husbandry and conspiracy to commit a felony.

The investigation began after the Canadian County sheriff’s office received complaints of thefts in southwest rural Canadian County. Investigators were led to a property where they thought stolen items were concealed or taken at the 16800 block of Reno Road West, Canadian County Undersheriff Chris West said.

“My investigators quickly learned that some of the items found tied in with and was a part of a larger theft ring where multiple tractors and pieces of machinery and equipment had been taken, involving tens of thousands of dollars,” Canadian County Sheriff Randall Edwards said in a statement.

“This is just the tip of the iceberg. We fully expect there to be multiple arrests and additional stolen property recovered as a result of Robby’s confession and involvement,” Edwards said.

Smith was taken to the Canadian County jail. His bond was set at $6,000.