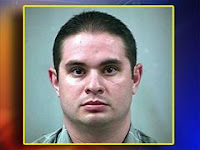 San Antonio police officer Patrick Muriel was arrested this week for indecent exposure after two female students at the University of Texas at San Antonio alleged he exposed himself.

Muriel, a five-year veteran patrolman, was placed on administrative duty pending the outcome of the UTSA investigation, according to SAPD.

The first report came from a student walking to her car in the parking lot, said David Hernandez, chief of the UTSA police force.

The woman said a man in a dark car called out to her. She thought he needed help, so she walked over. When she looked down, the man’s pants were down, Hernandez said.

The woman jumped back and the car sped off.

Police were saddened to learn Muriel was an off-duty SAPD officer.

“When you have large number of employees, no matter how hard you screen, you are going to get some that sneak through,” Hernandez said. “There is no way to get inside a person’s heart and see what their deepest darkest secrets are. It is rare and we thank God for that."